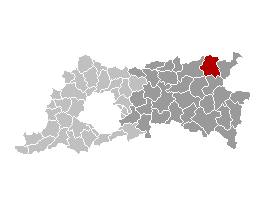 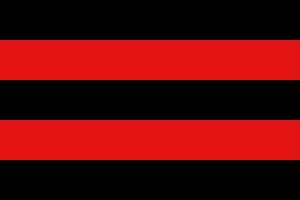 Scherpenheuvel (English: "Steep Hill"), the most important pilgrimage (Roman Catholic) in Belgium is located some 50 km east of . Its origins date back to the pagan worship that still survived during the Middle-Ages around a holy oak on this hilltop. The cross-shaped tree was thus "Christianized" with a statue of the Holy Mary.

Legend has it that around AD 1500 the Virgin Mary performed a miracle here, freezing into place a shepherd boy who tried to take home the small statue, thus foiling the theft. As of the 1550s, a flood of devoted pilgrims, arriving from the surrounding areas, came to the tree to pray for health and recovery of their ill loved ones. In 1580, the statue disappeared as Dutch-Protestant iconoclasts pillaged the region. 7 years later it was replaced by a new one, which still stands on the altar of the actual pilgrimage-church. The oak tree being almost dead but still inspiring in fetishist worship alongside the Roman Catholic devotion to Mary was felled by order of the . A first wooden chapel was built on the site and a number of statues of the Holy Virgin cut out of the trunk found their way to different sanctuaries (such as Luxembourg). The fame of Scherpenheuvel increased and increasing numbers of people arrived, begging for protection against plague and famine that swept the Low Countries as a consequence of the "Eighty Years War" (). The chapel soon became far to small for them.

In January 1603 a new miracle is reported: the statue weeps bloody tears. The religious schism in the Netherlands is blamed for the pain of Mary. In November 1603 the Spanish army defeats Protestant troops besieging , an important fortification in Northern Brabant.

Archduke Albert of Austria (appointed by the as the governor of the Low Countries), and his wife, the Archduchess Isabella (daughter of King ) donate for the construction of a stone chapel in Scherpenheuvel and make a pilgrimage themselves.

In 1604, a few months after its inauguration by the , the new chapel is looted by Northern troops. The statue is secured by Jesuits. Two months later the Protestants are chased from Ostend, their last stronghold in the Southern Netherlands. This victory is attributed again to the Holy Virgin. Scherpenheuvel is privileged as a city.Also in 1604, Philips Numann, clerk of the archbishop of Mechelen describes the legend of Scherpenheuvel in his "Historie der Mirakelen" (History of Miracles). The legend is classified as a "folk-tale", but he also reports about the miracles that are recognised as such by Catholic authorities. His book is translated from Dutch into French, Spanish and English and spreads the fame of Scherpenheuvel all over Western Europe.

In 1607, projects are ordered to the famous architect-engineer for the realisation of a bastion of Catholic Counter Reformation: the whole city should be an allegoric homage to the Mother of God, a "hortus conclusus" symbolizing her eternal virginity. Seven lanes lead towards the church. Its layout is based on a 7-pointed star, which stands for the abundance of God's mercy. In the church, the advent of Jesus is announced by 6 Old-Testament prophets and realised by Mary who gives birth to the Messiah. In 1609 the first stone is put in place for the unique structure in highly developed baroque style, which is finally inaugurated in 1627. The streets and layout of the town itself had been designed to mirror the shape. With its surroundings, it's now one of the best examples of the triumphalist architecture of Counter-Reformation in Belgium.The dome, adorned with 298 golden stars symbolizes the cosmos. The main altar is said to be placed on the exact spot where the old oak tree once stood.Archduchess Isabella attended the inauguration-mass without her deceased husband. She came on foot from nearby Diest, which gave birth to the foot-pilgrimages that still survive from places as distant as Maastricht and Bergen-Op-Zoom. She put all her gold and jewellery before the altar, a custom that persists to this day, in the form of coin throwing.

The pilgrimage at Scherpenheuvel flourished. The "Oratorianen", an order of religious fathers occupy with religious worship and pilgrimage logistics, had their abbey connected to the church by the "baroque gallery". They were chased during French occupation after the 1797 revolution and didn't return to the place after religious restoration in the beginning of the 19th century.

In 1927, the church was proclaimed a Roman-catholic "basilica minor".

Other traditions that survive the centuries at Scherpenheuvel are the "Kaarskensprocessie" (Procession of the candles) on the 2nd of November and blessing-processions for people, pets and animals, vehicles. The popularity of the pilgrimage also has a lot to do with the year-round fairy atmosphere that characterizes the place: lots of stalls with souvenirs, sugar sweets, typical bakery like the "pepernoten" and "moppen", hotels, bars and restaurants of different kinds.