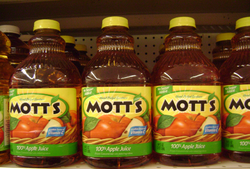 Mott's is a company involved in producing apple-based products, particularly juices and sauces. The company was founded in 1842 by Samuel R. Mott in Bouckville, New York, who made apple cider and vinegar. Mott products were exhibited at Philadelphia's Centennial Exposition in 1876 and Chicago's World's Columbian Exposition in 1893. In 1900 the company merged with the W.B. Duffy Cider Company to become Duffy-Mott. In 1933 the company introduced prune juice.

On May 23, 2010, 305 workers at the Mott’s plant in Williamson, New York, represented by the Retail, Wholesale and Department Store Union Local 220 (RWDSU), voted to strike after Mott’s parent company, Dr Pepper Snapple Group (DPS)-- despite healthy profits, an increase in market share and a skyrocketing stock price—proposed serious cuts to employee benefits.

The proposal from the company included a US$1.50 per hour wage cut for all employees, a pension elimination for future employees and a pension freeze for current employees, a 20 percent decrease in employer contributions to the 401(k) and increased employee contributions toward health care premiums and co-pays. DPS came under criticism for proposing cuts to worker pay at a time when not only was the local economy in turmoil, but the top three executives at DPS had doubled their pay between 2007 and 2009.[2]

State Attorney General Andrew Cuomo, in his capacity as the Democratic nominee for governor, wrote to Mott’s on June 25, 2010, urging the company to return to the bargaining table and come to a “fair and equitable solution” and that the “Upstate economy needs this plant to be working at full capacity.” [3]

The labor dispute has been a source of anxiety among many in the region, particularly the apple growers. In a letter to Larry Young, President and CEO of Dr Pepper Snapple Group, U.S. Senator Chuck Schumer (D-New York) expressed his concern that “with unemployment in the Rochester area nearly 10 percent, the ongoing labor shortage is not only harming the 305 workers of the RWDSU Local 200 who work in the facility, but can harm the entire Wayne County economy due to the facility's centrality to the regional and state apple market." [2]

This sentiment was echoed by the New York Apple Association, Inc., in a statement urging Mott’s to continue negotiations:

"The current impasse between the valued work force at the Williamson plant and management not only threatens the growers’ and workers’ future, but places more than 150 years of building brand recognition and consumer loyalty for Mott’s products at risk." [4]

On Monday, September 13, 2010, the strike ended after Mott's workers voted to approve the company's most recent proposal. The new agreement included a wage freeze, but not the pay cuts the company had demanded. The contract also preserved pensions for existing workers.

“Nobody wins in a strike,” said Mike LeBerth, president of the union local in Williamson. “Neither side is happy with what we got. Was it worth it? Yes, because we stood strong and the company knows we’re a force to be reckoned with.”

Larry Young, Dr Pepper Snapple’s chief executive, said, “From the beginning of our negotiations, we sought an agreement that supported our business, and we’re very pleased with this resolution.” [5]