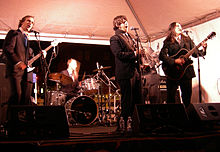 "Awesome" (the quotation marks are part of the name) are a Seattle-based septet with roots in cabaret and theater, self-described as "Part band, part art collective."[1] While they reject the "rock band" label, Lane Czaplinski, artistic director of On the Boards remarks, "If they are not rock musicians, "there is rock payoff."[2] Czaplinski has compared them to Polyphonic Spree and Scissor Sisters.

"Awesome" began as a cabaret act thrown together by seven experienced fringe theater actors. Although they continued to perform often in theatrical venues, their identity as a band and cabaret act has eclipsed their status as actors.[3] Around October 2003, several future members of "Awesome" played together in a They Might Be Giants tribute to raise money for Seattle's Open Circle Theater.[4] Their very first performance under the name "Awesome" (with just Ackermann, Mosher, Nixon, and Osebold) was in Seattle at Annex Theater's monthly cabaret "Spin the Bottle" On February 6, 2004,[2] and their first full-septet performance as "Awesome" was in the Jewelbox theater at Belltown bar the Rendezvous on June 30, 2004.[4] Their first major production was Delaware (first a multi-media stage production and later an album).[3] Gigs as a band have included performing on bills with Harvey Danger,[4][5] A. C. Newman,[4] U.S.E.,[4] The Presidents of the United States of America,[5] and The Long Winters.[5]

Band member David Nixon is a philosophy professor at the University of Washington, Bothell.[5]

Many of the group's theatrical pieces are non-narrative or have only minimal, non-linear narratives. For example, noSIGNAL (2006) was described by Seattle Times reviewer Brangien Davis as "addressing, among other topics, technical difficulties, recurring dreams, cell death, regeneration and bees."[6]