"Sabrina, the Teenage Witch" was an American sitcom based on the Archie comic book series of the same name. Its first four seasons aired on ABC (, In the UK) from , to , ; the final three seasons ran on from , to , .

The sitcom revolved around a girl who must learn to be responsible for her own actions. As she had the power of , she often used it to try to help her loved ones or herself, frequently resulting in literal puns that are often disastrous and humorous. She must also learn to hone her powers while keeping them a secret from those around her.

The program began with Sabrina's adventures in in the fictional town of Westbridge, located near (as opposed to Riverdale, Virginia in the comics). In the series' later seasons, Sabrina graduated from high school and enrolled in , then moved on to her attempts to live on her own and keep a job at the local newspaper. Breaking further from its comic roots, the show ended with Sabrina's wedding with Aaron, although, in the end, she abandons the wedding and runs off with her true love, Harvey.

The series came on the success of the 1996 TV movie, "Sabrina, the Teenage Witch", in which had played Sabrina Sawyer, with the two aunts played by (Hilda) and (Zelda). The show is similar to the late 1980s syndicated sitcom "Out of This World" which also revolved around a teenage girl with magic powers of her own.

When the series came out later that year, Hart became Sabrina Spellman (the character's original last name in the comics), and the aunts were now played by (as Hilda) and (as Zelda). The regular was Salem the wisecracking cat (a that was voiced by ). Hart's real-life sisters Emily and Alexandra played Sabrina's cousins, Amanda and Ally respectively and sister Samantha played a bridesmaid in Sabrina's wedding. The show was never filmed in front of a studio audience, because of the special effects used in its production; a was used instead. The series was filmed in a single-format, hence every audience clip is laughter and never an "ooh" or an "aw".

"Sabrina the Teenage Witch" was produced by Hart break Films and , and later was syndicated through - which would go on to absorb Viacom Productions in 2004, and be renamed to in 2006. Then in 2007, the syndication arm was renamed to .

Los Angeles commercial , himself a former model, got his start on the series, particularly handling all the shots of Beth Broderick.

The opening titles of seasons 1-3 shows Sabrina in front of a mirror posing with four different costumes and outfits as the cast members' names quickly flash on the bottom of the screen. The first three outfits are always the same, but the fourth one changes from episode to episode. At the end, Sabrina would say some sort of pun that related to the last outfit, then magically disappear.

The opening sequence of season 4 features the characters in bubbles.

The opening credits of seasons 5-7 are accompanied with a vocal theme song and feature Sabrina at various locations around Boston: , Boston Common, , , , Newbury Street, , , and Beacon Hill. In the credits of seasons 5 and 6, after leaving on Newbury Street, Sabrina walks down a flight of stairs and then the morph Sabrina into her room, lying on her bed next to Salem. In the final season, however, they morph her into arriving at Scorch. Upon pushing the door open, she is revealed to be walking into her house to greet Roxie, Morgan, and Salem.

There are three television movies made for the "Sabrina, the Teenage Witch" television series, one of which serves as the television pilot, and two are films within the series. 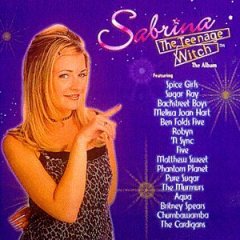 The "Sabrina, the Teenage Witch" soundtrack, which was released on , by , was certified Gold by the RIAA.

Currently, "Sabrina, the Teenage Witch" can be seen in the United States in syndication on cable television networks and . In Canada, the show can be seen on YTV. The show also ran on Nickelodeon's from 2003 to 2005.

On , announced the release of the first season of "Sabrina, the Teenage Witch" on DVD. A four-disc set which contains all twenty-four episodes of the first season - presented in full screen along with English Stereo Surround tracks and Closed Captioning. The set was released on . The second season was released on with some minor song replacements, such as the replacement of the song "" in the episode "The Equalizer". The release of the third season, on , saw more cuts and song replacements, including the removal of the guest appearance by .