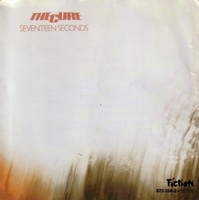 
"Seventeen Seconds" is the second studio by , released in April 1980 by . It is the only Cure album to feature keyboardist .

The album's songs are described by critics as bearing vague, often unsettling lyrics and "dark", spare minimalistic melodies. Some reviewers felt that "Seventeen Seconds" represented a far more mature Cure, who had come very far musically in less than one year [Kent, Nick. "Seventeen Seconds" review. "NME". ] . The record, mostly a collection of downbeat tracks, features ambient echoing vocals and minimally-treated instruments. [Nitsuh Abebe. [http://www.pitchforkmedia.com/article/record_review/16405/The_Cure_Seventeen_Seconds_Faith_Pornography Pitchfork Media review of "Seventeen Seconds, Faith, Pornography"] ] Smith said the record was produced with Michael Hedges very quickly; indeed, the track "The Final Sound" was actually planned to be much longer, but was cut down to 53 seconds because the tape ran out while recording, and they couldn't record it again. Inspiration was also very high, as Smith wrote the lyrics and music for most of the record on just two occasions. Most of the music was composed by Smith in his parents' home, on a Hammond organ with a built in tape recorder. Unfortunately, these demo sessions have been lost, which as been attributed for the lack of demo tracks on the remaster.

"Seventeen Seconds" was lauded by some critics, and panned as a "collection of soundtracks" by others. One reviewer described the album as a "sad Cure, sitting in cold rooms, watching clocks". Despite the mixed reception, the band was featured in several lengthy articles with numerous photos of a slender Smith, without makeup, who one critic called "alarmingly handsome", and the album was relatively successful when released. There was controversy concerning the band's "anti-image", established by the cover of "Three Imaginary Boys", which this album contributed to by blurring the photos of the band's members and the cover art. This is the first Cure album Smith was able to choose the art for.

Bassist and keyboardist Matthieu Hartley were added to the band's lineup. Gallup replaced , which relieved Smith as he felt Dempsey's basslines were too ornate and that they weren't gelling socially. Hartley's synth work added a new dimension to the band's newly ethereal sound, although Smith and he clashed over complexity (Hartley enjoyed complex chords; Smith wanted single notes). Like Dempsey, Hartley made a departure from the group, the latter after "Seventeen Seconds".

This record was repackaged in the UK (on the A&M label) with Faith as "Happily Ever After" — available as a double album or a single CD.

In 2000, "Q" magazine placed "Seventeen Seconds" at number 65 in its list of the 100 Greatest British Albums Ever.

"Seventeen Seconds" was reissued in the UK (26 April in the U.S.) as part of Universal's Deluxe Edition series. The new edition featured a remastered version of the album on the first disc, while the second contained demo and live tracks. However, the master tapes for the album were accidentally erased by a washing machine magnet, so this remaster was sourced from vinyl, unlike the rest. On the rarities disc, four of these rarities are recorded by the one-off , a group that featured Smith's postman Frank Bell as lead singer and which performed 70's style rock along the lines of Easy Cure. Disc 2 contains versions, either in demo or live form, of all 10 songs on the first disc. There are no never-before-heard tracks on the disc.

There also exists a one-CD reissue. It was released on in the UK and in the US. The CD features the original album, but does not contain the bonus disc. It is also released in the standard jewel case, and not a digipak. In some countries, the "Deluxe Edition" has become a collector's item and the production has phased out, being replaced by the more economic one-CD version.

;Original album, as above