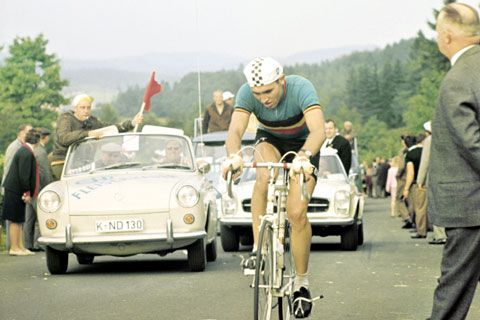 
Edouard Louis Joseph, Baron Merckx (IPA2|'merks) (born 17 June 1945 in , , ), known as Eddy Merckx, is a former professional . Merckx, regarded as the greatest and most successful cyclist of all time, [cite web
title = Happy Birthday, Eddy!
author = Velonews.com
date =
url = http://velonews.com/article/8224
accessdate = 2008-06-13 ] established several world cycling records, some of which remain unbroken to this day. Merckx was nicknamed "the " because he wanted to win every race he participated in, never "arranging" a race with another competitor. Other nicknames were "the Einstein of the two-wheelers", and, courtesy of , "Le Géant" (The Giant).

Merckx started competing in 1961. In 1964, he was selected for the road race at the 1964 Summer Olympics, and finished 12th place. In the same year, he became world champion in the amateur category, before turning professional in 1965 with the Peugeot cycling team. In 1966 he won the first of seven editions of . He started his first grand tour at the . He won his first stage here and finished seventh overall. Later that year he outsprinted Jan Janssen to become world champion in the professional category in , .

In 1968 with the rainbow jersey on his back and a change to the Italian Faema team, Merckx went on to win for the first time and started his domination of the Grand Tours by becoming the first Belgian to win the "" in 1968. [Cite book|last=Thonon|first=Pierre|title=Eddy Merckx du maillot arc en ciel au maillot jaune|publisher=De Schorpioen|date=1970] He would repeat this four times, equalling 's and 's record of five victories.

Starting the 1969 season, he won stage race. In the time trial, he overtook the five-time winner who over the previous 15 years had been the master of that discipline. Merckx went on to win and several weeks later.During the , he was found to have used drugs and was subsequently disqualified. He cried in front of the reporters, and to this day, protests his innocence. He argued that there were no counter-experts nor counter-analysis and that foreign supporters hated him. Further, he stated that the stage during which he was allegedly using drugs was an easy one, so there was no need to use drugs. The Belgian sent a plane to bring him to Belgium.

In his "Tour de France" debut in 1969, Merckx immediately won the yellow jersey (overall leader), the (best sprinter) and the red polka-dotted jersey ("King of the Mountains" - best climber in the mountain stages). No other cyclist has achieved this triple in the "Tour de France", and only and have been able to match this feat at the Grand Tour level, in the 1993 and 1995 "Vueltas", respectively. If the young riders' white jersey (for best rider in the Tour under 25 years of age) had existed at that time, Merckx would have won that as well, as he had only just turned 24. It was the first time a Belgian had won the Tour de France since 30 years earlier, and Merckx became a .1969 also featured the blackest day in Merckx's career, when he crashed in a towards the end of the season. A pacer and a cyclist fell in front of Merckx's pacer, . Wambst was killed instantly, and Merckx was knocked unconscious and suffered a . This accident cracked a and twisted his . He admitted in that, because of his injuries, his riding was never the same. He would frequently adjust his while riding and would always be in pain, especially while climbing.

In the , Merckx was the clear winner again, although not without difficulties. While climbing in 1970 to a stage win, he pushed himself so hard that had to be administered. In that Tour, Merckx won 8 stages, equalling the record of 1930 by . [cite web|url=http://www.cyclinghalloffame.com/races/results/results_tour_de_france.txt|title=Historical results - Tour de France|publisher=Cycling hall of fame] In that Tour, he again won the mountains classification and finished second in the sprinter's classification.

The greatest challenge to Merckx was in the 1971 . attacked and won the by several minutes. Ocaña held his lead until a crash forced him to withdraw, and Merckx could win the Tour again. The same year he also became world champion again.In 1972, there was much anticipation of a rematch between Merckx and Ocaña. Before that could happen, Merckx had a battle with in the 1972 in which Merckx beat the climber in the mountain stages. In the 1972 edition of the tour Ocaña became sick and withdrew and the duel did not materialize. [Cite book|author=Eddy Merckx and Marc Jeuniau|title=Plus d'un Tour dans mon sac; mes carnets de route 1972|publisher=Editions arts et voyages Gamma diffusion|date=1972]

At that moment, with four victories he was approaching 's record of five victories, and the French public was becoming hostile. For that reason, the Tour direction requested Merckx not to start in the ; instead Merckx participated in and won the , where he beat and , and the .

In 1974, Merckx started in the Tour de France again, which he also won, thereby equalling . Over the next 25 years, only and were able to equal the five victories. Then won the Tour a sixth (2004) and a seventh (2005) time. Merckx still holds the records for stage wins (34) and number of days in the Yellow Jersey (96).

Merckx's final victory in the in the 1974 edition was a tight battle between Merckx and two Italians. In the end, Merckx won by 12 seconds over and 33 seconds over . [cite book|last=van Walleghem|first=Rik|title=Eddy Merckx:the greatest cyclist of the 20th century|publisher=Pinguin Productions|date=1993|id=ISBN 1884737722] Merckx also won the world championship in 1974 for the third time, which only and had done before him, and only would do after him. Because of his victories in the three most important races of the year, the , the and the 1974 world championship, Merckx won the . Since then, only has been able to do that in 1987.

Merckx's domination in the Grand Tours came to an end in 1975. That year, he attempted to win his sixth Tour de France but became a victim of violence. Many Frenchmen were upset that a Belgian might beat the record five wins set by Jacques Anquetil. Merckx held the yellow jersey for eight days, which raised his record to 96 days, but whilst he was climbing the Puy de Dôme on stage 14, a French spectator punched him in the body. A later collision with the Danish rider broke his jaw. Although he could not eat solid food and was barely able to talk, Merckx did not retire. During the last stage, he attacked leader (but was caught by the ). Still Merckx finished that tour at the second place in the overall classification, the second place in the mountains classification and the second place in the sprinter's classification.

In addition to Grand Tour successes, Merckx has an impressive list of victories in one-day races (for a comprehensive list, see lower down). Among the highlights are a record of seven victories in (absolute record of victories in one single classic race), two victories in the , three wins in , five in (record), and two in the , a total of 19 victories in the "Monument" Classics. He also won the "World Road Racing Championship" a record three times in 1967, 1971 and 1974, and every Classic except . Finally, he won 17 "six-day" track races, often with .

The following are records that Merckx set during his career.

Merckx also set the in 1972. On 25 October, after he had raced a full road season winning the Tour, Giro and four Classics, Merckx covered 49.431 km at high altitude in . The record remained untouched until 1984, when broke it using a specially designed bicycle and meticulous improvements in streamlining. Over the next 15 years, various racers improved the record to more than 56 km. However, because of the increasingly exotic design of the bikes and position of the rider, these performances were no longer reasonably comparable to Merckx's achievement. In response, the UCI in 2000 required a "traditional" bike to be used. When time trial specialist , who had retired from road racing and had prepared himself specifically for beating the record, had another go at Merckx's distance 28 years later, he beat it by slightly more than 10 meters (at sea level).

Having retired, Merckx has a bicycle factory [ [http://www.eddymerckx.be website of Eddy Merckx bicycle factory] ] and is a race commentator. He was coach of the Belgian national cycling team during the mid-90s, and part of the Belgian Olympic Committee. Merckx is still asked to comment as an authority on cycling. As such, he has also figured as special advisor for the recent UCI addition "Tour of Qatar" since 2002.

In May 2004, he underwent an operation to cure the constant stomach ache which he suffered since he was a young man. He lost almost 30 kg in the process, and took up recreational cycling again.

In 1967 Merckx married . Merckx's mother asked the priest to celebrate the ceremony in French, a choice that ended up being a contentious issue in Belgium. They had two children: a daughter (Sabrina) and a son (Axel, who also became a professional cyclist).

Despite this early incident, Merckx may be considered a perfect ambassador to Belgium ("i.e." not leaning towards or , but supporting the unity of the country). This, with his achievements, pushed him to high rankings in both the Flemish (3rd) and Walloon (4th) editions of the Greatest Belgian contest, held in 2005.

In 1996 King of the Belgians gave him the lifelong title of . In 2000 he was chosen Belgian "Sports Figure of the Century".

Merckx is known as a quiet and modest person. Many of his former helpers have worked in his bicycle factory and join him during recreational bike tours. When he ended up in 3rd place behind and in the Greatest Belgian contest, after being named as one of the favourites, he stated that he "...would have been outright ashamed to have ended up in front of Damien."

Merckx has condemned doping, but as mentioned he also tested positive three times in his career. For this very fact, the organization of the 2007 World Championships in explicitly included Merckx in a list of people who would not be welcome at the event. The decision caused quite a row and was criticized in the press and by the UCI. [cite web
title = Eddy Merckx joins list of unwelcome people in Stuttgart
author = Cyclingnews.com
date =
url = http://www.cyclingnews.com/news.php?id=news/2007/sep07/sep26news2
accessdate = 2007-09-28 ] When he confirms his stance against doping, Merckx will typically point out that cycling is unfairly treated when compared to other sports.

In the 1990s, he became a friend of and supported him when he was accused of drug use, stating he rather "believed what Lance told him than what appeared in newspapers". One of his closest friends is former -player .

* When the visited in 2005, she met Merckx as a cultural representative of Belgium. [cite web
title = Rice's Packed Schedule Leaves Little Room for Cultural Visits
author = Glenn Kessler
date =
url = http://blog.washingtonpost.com/on-the-plane/rice-in-middle-east-january-2007/rices_packed_schedule_leaves_l.html
accessdate = 2007-08-25 ]
* A station on the is named in his honour. In this station his world record bike can be seen.
* A cycling contest, the Eddy Merckx Grand Prix, is named in his honour.
* In the Merckx makes a cameo as a "fast runner" in the album .
* In 2000, the Belgian magazine Knack declared him "Belgian of the Century" and four years later, the magazine called him the "Greatest Belgian".
* In the mid-seventies Merckx figured in television for s, for which he was criticized and which he now regrets.