Beneath the Planet of the Apes

Beneath the Planet of the Apes

Infobox Film
name = Beneath the Planet of the Apes 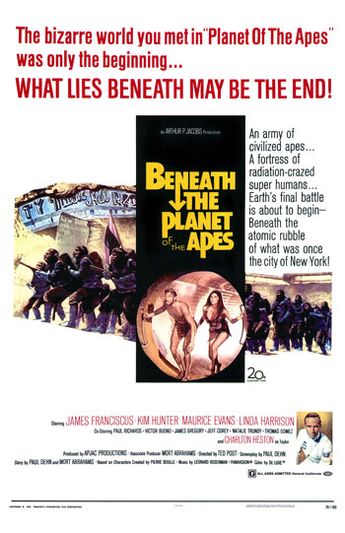 The story begins at the conclusion of "Planet of the Apes", with and Taylor discussing mankind, and Cornelius (Roddy McDowell) quoting from the apes' sacred scrolls:

The opening credits show Taylor and Nova riding through the "Forbidden Zone".

Elsewhere in the Forbidden Zone is a severely damaged spacecraft which has crash-landed. It contains two survivors: an astronaut named Brent () and his skipper, Maddox, though the skipper succumbs to his injuries and dies soon after. Brent believes it is 3955 . After burying his skipper, Brent is approached by Nova, who is on horseback and wearing Taylor's metal I.D. tag. Hoping that Taylor may still be alive, Brent mounts the horse behind her and they ride out of the desert into the greener, cultivated area outside of Ape City.

They sneak to an filled with cheering apes. Addressing the crowd is General Ursus (James Gregory), leader of the Ape Army, who is calling for the total extermination of all humans. The s and s in the crowd are silent, not agreeing with the statement. Ursus wants the Apes to invade the Forbidden Zone, conquer it, and use it as a potential food source. After the rally, Dr. Zaius and General Ursus discuss the impending invasion, with Dr. Zaius conveying his misgivings about fighting an unknown and ly dangerous enemy. Ursus says, “We invade or we starve. It’s as simple as that.”

While leaving the amphitheater, Brent is wounded by a patrolling trooper. Nova takes him to the home of Cornelius and Zira, who explain the situation to Brent and treat his wound. Dr. Zaius arrives, so Brent and Nova hide and overhear how Zaius protected Cornelius and Zira from charges of and s before, but now scolds Zira for her during the meeting, wherein she remained seated when everyone else stood in applause. He informs them that he will be joining Ursus on the invasion of the Forbidden Zone. While he is away, he asks for reassurances that they will stay out of trouble.

Brent and Nova quickly leave Ape City, but are immediately captured by a gorilla patrol. They are taken back to Ape City, passing squads of gorilla soldiers going through military exercises using humans for targets. At the compound, they are spotted by Zira, who feigns scientific interest to save them. However, Ursus has authority over them. As they are loaded back into the wagon, Zira pretends to lock the door but leaves it unlocked, enabling them to escape.

After escaping, Brent and Nova hide in an unnatural-looking cave which Brent soon recognizes was formerly Queensboro Plaza station. Overwrought, he wonders aloud what could have happened to destroy the world he knew. Brent and Nova go deeper into the tunnels, eventually following a humming sound. Brent hears voices that order him to kill Nova, resisting them, he enters the remains of St. Patrick's Cathedral, and finds a person inside, kneeling before the high altar. However, the object of worship fills him with horror - an intact nuclear .

In the ruins of , the city rulers barrage Brent with questions asked telepathically, mentally torturing him when he is evasive. When it is apparent that he can not handle their ic communication, their leader instructs them to use verbal questioning. When they torture Nova, Brent confirms their worst s; “The Apes are marching on your city!” Other than their “Divine Bomb”, the mutants’ only defenses are telepathic illusions.

In the Forbidden Zone, the ape army comes upon the horrible sight of their gorilla scouts on inverted crosses, engulfed in flames. Ursus is outraged and then frightened when a monolithic statue of their Lawgiver appears over them and begins to bleed. Instead of instilling fear, Zaius is incensed at the sight but recognizes it as an illusion, and charges through it, confirming its falsehood. Ursus orders the army to continue their advance.

With the failure of their illusion to dissuade the apes, the mutants have no choice but to prepare to detonate the “Divine Bomb.” The mutants hold a worship service in the cathedral. Brent and Nova are given robes to wear to the ceremony. The congregation sings a corrupted version of the “”, praising “the Bomb Almighty,” and in unison remove masks which have concealed their true appearance. Exposed to centuries of , the mutants are skinless and horribly scarred.

Afterward, Brent is separated from Nova and put in a jail cell with Taylor. The mutant explains that his people survived by forcing their enemies to kill each other. Under his telepathic control, Taylor and Brent fight each other. Hearing the sound of the fighting, Nova escapes her guard and runs to the cell. She cries out “Tay-lor!” The sound of her voice breaks the mutant’s concentration, freeing Brent and Taylor from his control and they kill him. At this time, the apes have entered the tunnels of the city, and one manages to kill Nova.

Using a , the apes force their way into St. Patrick’s Cathedral to be confronted by Méndez, the leader of the mutants. The missile rises into launch position, and Taylor and Brent arrive just in time to see Méndez gunned down by the gorillas before he can fire it. The gorillas start to pull down the missile with ropes.

Brent had described the missile to Taylor in the cell which, from the "ΑΩ" () markings, Taylor recognized as the "doomsday bomb"; if it is launched, it will destroy the entire planet. Brent and Taylor attempt to stop Ursus from accidentally setting off the weapon, but Taylor is shot. Seeing this, Brent goes into a rage. Coming out into the open, he starts killing gorillas, beginning with Ursus himself.

As this is going on, Zaius confronts Taylor. The mortally wounded man pleads with Zaius for help. Zaius contemptuously refuses: "You ask me to help you?! Man is evil, capable of nothing but destruction!" With this remark, Brent's rifle empties and the gorillas kill him in a barrage of gunfire. With his last words, "You bloody bastard...", Taylor dies, and his outstretched hand falls on the control switch that triggers the bomb, destroying the Earth itself and killing all life, including both humans and apes, living on it. The film ends with a narration (spoken by veteran ):

The sets of the mutant's council chamber and the temple of the bomb were redresses of the and hotel lobby sets from the film "Hello, Dolly!". Contrary to popular belief, the council chamber set was not redressed as a pool in the movie "Superman" as "Beneath" was filmed in the United States and "Superman" was filmed entirely in the United Kingdom (with the exception of some minor location shooting in New York City and some background plates of desert land). The pool set was later used again in 's "". ["BENEATH THE PLANET OF THE APES" Original Soundtrack by Leonard Rosenman Label: Film Score Monthly Vol. 3 No. 3, background notes] ["PLANET OF THE APES: THE LEGACY COLLECTION"]

Relation to the Planet of the Apes series

* could not return for his role in this sequel, as he was in directing "Tam Lin". Actor David Watson portrays Cornelius through most of the film. Although uncredited, an edited version of the ending of the first movie was used in "Beneath", making McDowall the only actor to appear in all five "Ape" movies. The animated TV series is the only original "Apes" project of which McDowall is not a part.
* Actress appears in all four of the sequel movies.
* Charlton Heston showed little interest in reprising his Colonel George Taylor role from the first movie, agreeing to briefly appear with the provision that Taylor be killed at the story's start. Instead, Taylor disappears at the story's start and is killed near the end. [BEHIND THE PLANET OF THE APES documentary, in the DVD box sets).]
* Heston claimed it was his idea that Taylor destroy the planet. He hoped that would end the series; not so, three additional were made by APJAC Productions. [BEHIND THE PLANET OF THE APES documentary.]
* This movie mentions the "Hasslein Curve", a rift in time that returned Taylor's and Brent's spaceships to Earth, far in its future. This is the second reference to Dr. Otto Hasslein, who appears in the next sequel, "".
* There was a continuity error. In the first movie Taylor and his comrades arrived back to Earth 3978 but in "Beneath" it was 3955, some twenty-three years earlier. Either Taylor's or Brent's chronometer was wrong.

*In the "" episode "I Second That Emotion", , , and Leela must venture into the sewer to rescue Leela's pet . They soon discover a race of mutants living in the sewer system who worship a era nuclear missile similar to the one in the movie. When questioned by Fry about their religion one of the mutants replies "No one's really that observant. It's mainly a Christmas and Easter thing".

*The "" episode "" features host segments in which intelligent apes, the rulers of the Earth 500 years in the future, visit pale humanoid neighbors of theirs who worship a broken thermonuclear device. Mike Nelson accidentally gives the apes advice on how to fix the bomb, which subsequently explodes and destroys the planet.

* The novelization of the film by , retained the original scripted ending. Brent does not kill General Ursus. Taylor confronts him and Dr. Zaius. As Taylor tries to reason with Zaius, Zaius condemns him and Ursus repeatedly shoots Taylor with his pistol; Brent's rifle empties and the gorillas kill him. Ursus is horrified, telling Zaius that he has emptied the pistol into Taylor; he should be dead, but he still lives. Knowing he is dying, Taylor (after Zaius refuses to help him) decides to stop the violence by detonating the bomb. This he does, destroying the Earth itself. [ "Beneath the Planet of the Apes" by Michael Avallone (Paperback - 1970)]