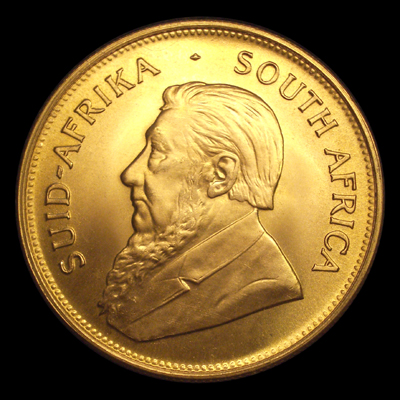 thumb|300px|right|The_face_of_, shown on the obverse side of the coin.]

A Krugerrand is a n , first minted in in order to help market South African gold. The coins have status in South Africa but are not actually intended to be used as , which is a reason it is regarded as being one of the world's .

The Krugerrand was the first coin to be tenderable at the of its face gold content; by contrast, earlier gold coins such as the had a tender value in currency engraved on their face, which could be completely divorced from their market value. The Krugerrand was the first gold coin to contain precisely one ounce of fine , and was intended from the moment of creation to provide a vehicle for the private ownership of gold. By bestowing legal tender status upon the coin, Krugerrands could be owned by citizens of the , which at that time prohibited private ownership of bullion but allowed ownership of foreign coins. However, due to the policy of in South Africa, the Krugerrand was declared illegal to import in many Western countries during the 1970s and 1980s until South African political reform from 1990 to 1994.

Originally, it was sold at a significant premium of five percent over the base gold value, and only one size of coin was made, containing one (31.1035 g) of gold. Today Krugerrands are offered in a variety of sizes, at premiums of no more than one percent above the market price of gold.

Since the Krugerrand is minted from gold alloy that is 91.67 percent pure (22 karats), the actual weight of a "one ounce" coin is 1.0909 troy s (33.93 g), to provide one troy ounce of pure gold. The remainder of the coin's mass is made up of (2.826 grams), giving the Krugerrand a more orange appearance than silver-alloyed gold coins. Alloys are used to make gold coins harder and more durable, so they can resist scratches and dents during handling. In , three other sizes were introduced, offering a half, quarter, and tenth ounce weights. In total, 54.5 million coins have been sold. Fact|date=April 2008

The Krugerrand gets its name from the fact that the shows the face of , a prominent resistance leader against the British and eventually the fifth, and last president of the old holding that office for four terms. The reverse depicts a , one of the national symbols of South Africa that was designed by and used on the reverse of the earlier 5 shilling South African coinage for King George VI and Queen Elizabeth II. The name "South Africa" and the gold content are inscribed in both Afrikaans and English.

The success of the Krugerrand led to many other gold-producing nations minting their own bullion coins, including the in , the in , the British in and the in .

The produces limited edition proof or medal-coin Krugerrands intended as collectors items. These coins generally have a value above base gold value. They can be distinguished from the bullion Krugerrands by the number of serrations on the edge of the coin. Proof coins have 220 while bullion coins have 180. [http://www.samint.co.za/CoinCollection/FAQ.asp Coinworld at SA Mint]

The official site of the South African Mint Company and the Rand Refinery both state the historical reasons that caused Krugerrands to be made out of gold.

The FTC warns about false claims on bullion coins, and advices to check that the coins you want to buy are not really imitation medals created by fraudulent "mints".