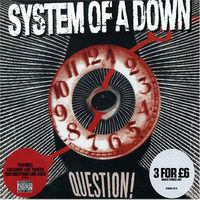 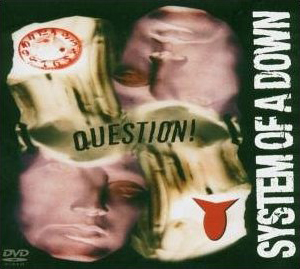 
"Question!" is a song by the band . It is the second single of their fourth album "", which focuses on life after death. The song was first premiered by the famous radio station on , and was released to alternative and rock radio stations on of the same year.

"Question!" is written in the key of E minor - a somewhat unusual key for System of a Down, which normally relies heavily on Cm, C#m, and F#m. The song uses five different time signatures (5/4, 9/8, 6/4, 3/4, and 4/4). The acoustic guitar intro and part of the verse is in 9/8 (3+2+2+2, essentially 4/4 with an extra eighth note on beat 1). The verse briefly switches to 3/4 (when Serj sings "Are you dreaming?"). The guitar motif after the acoustic intro is in 5/4. This same section appears throughout the song as well. The chorus is in 6/4. The heavy tremolo-picked section towards the end underneath the vocals is in 4/4. plays acoustic guitar in the intro and deeper in the background behind lead guitarist .

The song is sometimes compared to one of System of a Down's other songs "Aerials," which also deals with the nature of life in the lyrics. Both are primarily sung by Serj but seem to have Daron as back-up in the chorus. Music similarities are not as easy to spot. Aerials does not have the wide variety of time signatures that Question has, which allegedly makes the song difficult for even the band to play.

The video was released on , 2005 on and the band's website. The opening scene is of a boy with gray hair, clothes, and skin shooting a red bird with a , which coincides with the start of the song. At this point the video switches to a scene of the band members on a theater stage, performing music for a play. The play is based on a theme of life, death, and , revolving around two lovers, a man in a dark suit and a woman in a red dress, who are shown both as children and adults. As the music reaches its climax, the woman collapses after eating a red berry and the man screams in grief. The video closes with an intense scene of a woman being followed by a shot of a newborn baby wrapped in red cloth. The color is central to the video, tying together the bird, the girl, the woman, and the baby in a cycle of rebirth.

produced the video (and co-directed it alongside ) after allegedly having an image of the video in a nightmare. It is claimed that before the dream he had no intentions of producing the video. In fact he didn’t want any special treatment over other possible producers for being in the band so he submitted his idea anonymously. The UK Single edition of "Question!" was released in the United States as Hypnotize Value Added available only at Best Buy stores.