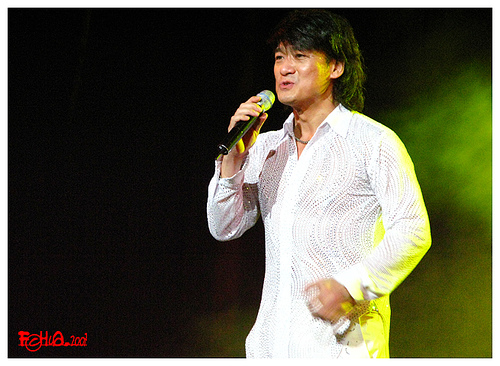 Wakin Chau is a and popular in , , and . He was known as Emil Chau through the 1980s and 1990s, and by 2000 he reverted to his given name Wakin. As of August 2007, he has released more than 40 albums and held several international concert tours.

Wakin Chau was born in a rice store owned by his family in , Hong Kong. Growing up as the fourth son in his seven-member family, Wakin learned to play the guitar when he was about 13 years old. In 1979, he left for to major in mathematics at . During his college years, he sang and played folk songs in local coffee shops. This activity was a tradition among NTU students, and it is how Wakin learned to sing in Mandarin, which would be key to his future as a music-maker in .

Wakin had high hopes to establish a career as a recording artist, and he actively sought out contacts in the music industry. But a persistent lack of interest eventually led him to give up trying to become a performer — instead, he could sign on as an assistant producer at , where he wrote marketable pop songs for other artists.

Wakin was later encouraged by to sing some jingles for commercial advertising spots. One of these tunes was for a car commercial, and it happened to catch the attention of Wakin's boss at Rock, who realized it was the voice of his own assistant producer.

That moment opened the door for Wakin to record and release his first Mandarin album under the label in 1987. For a man who had dreamed of performing professionally but had settled on being a record producer, this was a period of particularly good fortune that launched a succession of chart-topping records.

Shortly before his music career took off, Wakin the record producer met an American girl named Constance Woods, whose father was in Taiwan as a Fulbright scholar. Seeming to have plenty in common (including birthdays only one day apart) Wakin and Constance began to date, got engaged and then on 16 November 1986, they married in Taipei. Four months later there was another ceremony with family and friends in the on 14 March 1987. They have a son named Andrew and a daughter named Anya.

From 1985, Emil Chau — who has been using his given name Wakin since 1999 — has released more than 40 records in Mandarin, and English. He has become a prominent name in the and has fans of all ages not only around Asia but also in North America, Europe and elsewhere. His platinum albums such as "You Make Me Happy and Sad" (讓我歡喜讓我憂), "The Flowery Heart" (花心), "Music Brings Us Together" (有弦相聚), and "Emil & Friends" (朋友) have won awards in Taiwan, Mainland China, Hong Kong and .

Wakin has appeared in a number of films and made guest appearances on TV and radio programs in China, Hong Kong, Taiwan, Malaysia, Singapore and Japan. Alongside his singing career, he is a restaurateur and also is active in international charitable causes, such as kidney disease charities in Singapore, the January 2002 "Take a Deep Breath" concert in Taipei to raise money for local health-care organizations, Beijing's 4th Grand Charity Drive for Children in 2005, and Jackie Chan's all-star concerts in Las Vegas.