Zhou Dunyi (1017–1073) (Chinese (traditional): 周敦頤; Chinese (simplified): 周敦颐; Pinyin: Zhōu Dūnyí; Wade-Giles: Chou Tun-i), born Zhou Dunshi (周敦實), courtesy name Maoshu (茂叔), was a Chinese Neo-Confucian philosopher and cosmologist born in present-day Yongzhou during the Song Dynasty. He conceptualized the Neo-Confucian cosmology of the day, explaining the relationship between human conduct and universal forces. In this way, he emphasizes that humans can master their qi ("vital life energy") in order to accord with nature. He was a major influence to Zhu Xi, who was the architect of Neo-Confucianism. Zhou Dunyi was mainly concerned with Taiji (supreme polarity) and Wuji (limitless potential), the yin and yang, and the wu xing (the five phases). 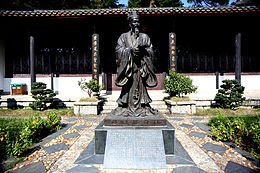 Zhou Dunyi (Chou Tun-i) (1017-1073) Born in Yingdao county, Daozhou prefecture, the southern region of Hunan province. He was born under the name Zhou Dunshi to a scholar-official family. He changed his name to Zhou Dunyi in 1063 to avoid the former personal name of the new emperor, Zhao Zongshi (Emperor Yingzong). After his death he was commonly called Zhou Lianxi (周濂溪), a name he adopted in retirement based on the stream (Lianxi, or Lian Stream) that ran by his retirement home near Mount Lu (Lushan).

His father died when he was fourteen and he was taken in by his uncle Zheng Xiang. He received his first posting in government through his uncle. Although very active in his civil service career he never did achieve a high position or get the "Presented Scholar" degree (jinshi). Some of the positions that he held were district record keeper (1040), magistrate in various districts (1046-1054), prefectural staff supervisor, and professor of the directorate of education and assistant prefect (1061-1064), among others. He resigned from his last post one year before he died. He died in Lushan, Jiangxi province.

The Taijitu of Zhou Dun-yi

Taiji Tushuo (太極圖說; "Explanations of the Diagram of the Supreme Ultimate" or "Diagram Explaining the Supreme Ultimate"). It was placed at the head of the neo-confucian anthology, jinsilu (Reflections on things at hand) by Zhu Xi (朱熹) and Lu Zuqian in 1175. He fused Confucian ethics and concepts from the Yijing (The Book of Changes) with Daoist naturalism. He developed a metaphysics based on the idea that "the many are ultimately one and the one is ultimate." This was the first 11th century Chinese text to argue for the inseparability of metaphysics (or cosmology) and ethics.

It contained his theory of creation, which can be summarized in the following paraphrase of its first section: "In the beginning, there was t'ai chi (taiji) (the great ultimate of being), which was fundamentally identical with wu chi (wuji) (the ultimate of non-being). Because of the abundance of energy within t'ai chi, it began to move and thus produced the yang (the positive cosmic force). When the activity of the yang reached its limit, it reverted to tranquility. Through tranquility the yin (the negative cosmic force) was generated. When tranquility reached its limit, it returned to movement (yang). Thus yin and yang generated each other. Then, through the union of the yin and the yang the transformation of both, the five agents (or elements) of metal, wood, water, fire and earth were brought into being. These five agents are conceived of as material principles rather than as concrete things. They can therefore be considered the common basis of all things. The interaction of the yin and yang through different combinations of the five agents generates all things in a process of endless transformation." (Arrington, 1999, p. 46)

Zhou Dunyi postulated that human beings receive all these qualities and forces in their higher excellence, and hence are the most intelligent of all creatures. He also believed that the five agents corresponded directly to the five moral principles of ren (humanity), yi (righteousness), li (propriety), zhi (wisdom), and xin (faithfulness).

Tong Shu (translated as The All-Embracing Book or as Penetrating the Book of Changes). This writing was a reinterpretation of the Confucian doctrines. It was the basis for ethics in neo-Confucianism. It stated that the sage is a superior man who acts in accordance with the principles of propriety, humanity, righteousness, wisdom, faithfulness, tranquility and sincerity. Sincerity being the basis for moral nature; it can be used to distinguish between good and evil and to perfect oneself.

It spoke of principle, nature, and destiny together, which became 3 cardinal concepts of Confucian thought. He had a Daoist perspective toward nature. There are stories of Zhou Dunyi loving his grass so much that he would not cut it, reinforcing the concept that humans should appreciate life in nature and the importance of non-action. Zhou Dunyi is also known to have said that the best quality of life is that of a pure Lotus growing out of dirty waters, where the Lotus is the natural equivalent of the noble person (junzi). He is known for pulling many ideas from Daoism, Buddhism and Confucianism.

Zhou Dunyi had only two students who made any major contribution to Confucianism. Those two students were his nephews Cheng Yi and Cheng Hao. The Cheng brothers only studied under Zhou Dunyi for a short time when they were younger. The brothers moved on to establish their own school, the Cheng-Zhu School, which dominated Chinese philosophy for over 700 years. Zhou Dunyi is considered the founding father of that school although there are no references in the Cheng brothers writings to his contributions.

Zhou Dunyi was a major influence on Zhu Xi, who was considered one of the greatest Confucian thinkers since Confucius himself. Zhu Xi was known to have said that Zhou Dunyi was the first great sage and first of the Song Dynasty. Zhu Xi defended Zhou Dunyi on the importance of his concept of Wuji.

Though he never had much influence during his lifetime, he was remembered as warm, humane, and kin with the natural world. Many Confucians believed that he embodied the virtue of "authenticity". He had great insight into the Way of Heaven. There are some stories that say that he did not learn from any teacher, but received his information from heaven directly.