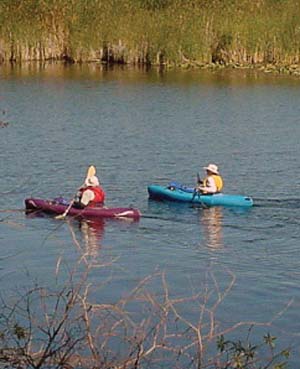 The Wood River is a short river in the southern region of the of , and part of the drainage. It flows convert|18|mi|km through the , land, and private property in southern . Its watershed consists of convert|220|mi2|km2 of forest, rural pasture land, and . The river provides habitat for many species of wildlife including native .

The Wood River flows through , Oregon. The Wood River headwaters emanate from a large natural spring located in . The that feeds the spring is believed to originate twenty miles (32 km) to the northwest in the east side drainage of . The Wood River meanders through pine forest and agricultural land for convert|18|mi|km before flowing into .

The Wood River’s largest tributary is Anne Creek which originates inside the boundary of Crater Lake National Park, and is fed by the park’s snowpack as well as groundwater from natural springs. After leaving the park, Anne Creek passes through the Fremont-Winema National Forests and then runs along the western border of for about a mile. It then crosses private pasture land and is joined by Sun Creek before joining the Wood River, about a mile south of Kimball State Recreation Site.

From there, the Wood runs south through the Fremont-Winema National Forests and private pasture land before Fort Creek joins the flow. Below Fort Creek, the river flows through private pasture land and then opens into a wide marsh. Much of the original marsh is now pasture land. Water from the river is diverted into a system of to grazing land in the surrounding valley. Finally, Crooked Creek joins the Wood approximately one mile before it empties into Agency Lake, which is connected to Upper Klamath Lake.

The Wood River watershed drains convert|220|mi2|km2 forest land in the southeast of and the Wood River Valley. The drainage around its headwaters is forest county dominated by and with some in meadow lands. Anne Creek drains steep alpine forest country. From near its headwaters to the border of Crater Lake National Park, the creek has cut a deep canyon through the forest that is a well know feature within the park. After leaving the park, Anne Creek flows into flat meadow lands on the western border of Sun Pass State Forest. Anne creek also feeds several irrigation canals including Scott Ditch, Shattuck Ditch, Loosely-Streeter-Cardwell Ditch, and Copeland Lateral Ditch. Excess flow from these canals is returned to Annie Creek and the Wood River. The lower Wood River flows through pasture land and ultimately opens into a large marsh before draining into Agency Lake.

In 1863, the established near the Wood River in south central Oregon. Soldiers constructed a on Fort Creek, and use the lumber it produced to build officers’ quarters, troop barracks, a and , a small hospital, a bakery, stables, and other necessary structures. To the north of the post, the army planted convert|3000|acre|km2 of to supply fodder for it horses and mules. The fort was abandoned in 1889. None of the original buildings remain today. [Brown, Jame E. (Oregon State Forester) and Roy Woo (Klamath-Lake District Forester), [http://www.odf.state.or.us/DIVISIONS/management/state_forests/sfplan/eorfmp95-final/1_back.pdf “Section I, Background and Planning Process”] , Eastern Oregon Region Long-Range Forest Management Plan Oregon Department of Forestry, Salem, Oregon, May 1995.]

Annie Creek and Sun Creek are extremely important because of the relative rarity of water and riparian habitat in the area. Both creeks are classified as a large, fish-bearing stream under provisions of Oregon Forest Practices Act. This reserves sufficient stream flow to support aquatic life, but does not override the most senior .

The waterway provides habitat for river wildlife including , , and s. The river also supports non-aquatic animals. Common animals in the Wood River area include s, s, s, , , , , s, and . Domestic are common in the Wood River Valley.

In September 1992, Congress appropriated funds for the Bureau of Land Management to purchase convert|3200|acre|km2 of natural wetland along the north end of Agency Lake at the mouth of the Wood River. This wetland area was converted to pasture land in the 1950s and 1960s. The land purchase was completed in 1994. Since acquiring the Wood River property, the Bureau of Land Management has successfully restored the wetland area and adjacent Wood River channel to a more natural state. The channel restoration project was completed in the 2001. The new channel meander through the marsh. This meandering flow has increase in the length of the Wood River by over one half mile. Overall, this project has improved water quality and created better habitat for fish, birds, and wildlife. [ [http://www.oregon.gov/OWEB/MONITOR/docs/mr_WRW_2003-05.pdf "Wood River Wetland Monitoring Report 2003-2005"] , Klamath Resource Area, Bureau of Land Management, United States Department of Interior, Klamath Falls, Oregon, 2005.]

There are several recreation sites along the Wood River. Jackson F. Kimball State Recreation Site has a day-use area and ten campsites. Visitors to the park can also enjoy water activities like , , and . A short trail connects the main campground to the Wood River’s headwaters spring. The park is located just off of Highway 232, approximately convert|20|mi|km southeast of Crater Lake National Park, and convert|40|mi|km northwest of .

The Fremont-Winema National Forest maintains a day-use site along the Wood River. The Forest Service site provides access to trails and shoreline fishing. It also has picnic tables and restrooms, but visitor must bring their own drinking water. The site is located convert|33|mi|km|sing=on north of Klamath Falls on Sun Pass Road, a mile off Highway 62 (also know as Crater Lake Highway). [ [http://www.fs.fed.us/r6/frewin/recreation/winema/picnicking/wood.shtml "Wood River Day Use Area"] , Fremont-Winema National Forest, Unites States Department of Agriculture, Lakeview, Oregon, 2 May 2005.]

Wood River offers excellent fishing that can be accessed from the shore or by canoe or kayak. Brook, brown, and rainbow trout are found in the Wood River and its tributaries. A population of native Redband trout lives in the upper Wood River between Kimball state park and the confluence of Anne Creek.