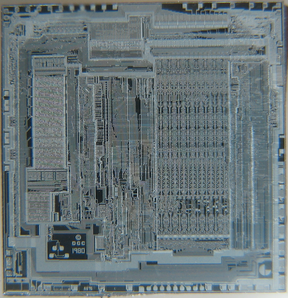 The Data General Eclipse line of computers by Data General were 16-bit minicomputers released in early 1974 and sold until 1988. The Eclipse was based on many of the same concepts as the Data General Nova, but included support for virtual memory and multitasking more suitable to the small office than the lab. It was also packaged differently for this reason, in a floor-standing case the size of a small refrigerator.

If the Nova was an improved PDP-8, the Eclipse was meant to compete against larger PDP-11 computers. However, it kept the simple register architecture, and the stack was kept in a special memory address location, as it was on the later 32 bit Data General Eclipse MV/8000. The AOS operating system was quite sophisticated, and far advanced compared to the PDP-11 offerings, with access control lists (ACLs) for file protection. One of the key goals for the 32-bit MV was to be able to run 16-bit applications without modification, and the AOS/VS 32-bit operating system would indeed run 16-bit AOS binaries. (By contrast, although the VAX-11 could run PDP-11 code in a compatibility mode, the MV/8000 did not require a "mode bit.")

Production problems with the Eclipse led to a rash of lawsuits in the late 1970s, after new versions of the machine were pre-ordered by many DG customers and then never arrived. After over a year of waiting, many decided to sue the company, while others simply cancelled their orders and went elsewhere. It appeared that the Eclipse was originally intended to replace the Nova outright, also evidenced by the fact that the Nova 3 series released at the same time was phased out the next year. However, strong continuing demand resulted in the Nova 4, perhaps as a result of the continuing problems with the Eclipse.

The 16-bit Eclipse series was replaced by the 32-bit Data General Eclipse MV/8000 in 1980. The development of this machine was described by Tracy Kidder in his book The Soul of a New Machine.

The Eclipse may have been named by James Gossel, a high school student at the time, whose father worked at DG and asked him for the name suggestion.[citation needed]

The original Cray-1 system used an Eclipse to act as a Maintenance and Control Unit (MCU). It was configured with two Ampex CRTs, a 80 mb Ampex disk drive, a thermal printer, and a 9-track tape drive. Its primary purpose was to download an image of either the Cray Operating System or customer engineering diagnostics at boot time. Once booted, it would act as a status and control console via RDOS station software.