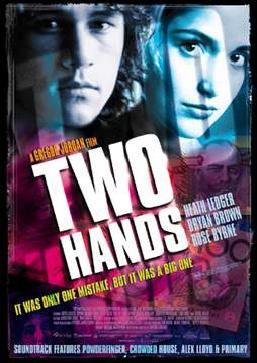 "Two Hands" is a n , written and directed by . [cite book|authorlink=Powderfinger|title=Fingerprints: The Best of Powderfinger, 1994-2000|pages=3|publisher=|date=] The film stars as Jimmy, a young man in debt to Pando, a local gangster, played by and also stars , , , and . It won the in 1999. It was filmed in but was not released in Australia until . Before its release, it was screened at the in the but was not released to DVD in the US until December .

"Two Hands" is set in locations around , starting in the of Kings Cross. Jimmy, while working at a strip club, is approached by local mob boss Pando who says he has work for him. Pando gives Jimmy $10,000 to deliver to a woman in Bondi, and when she appears not to be home, he goes for a swim on the beach. Unfortunately the $10,000 is stolen by street kids while he is swimming, leaving him heavily indebted to the understandably furious Pando and his gang.

The car Jimmy was using on the job - a Ford Falcon belonging to Pando's associate Acko - is stolen by a young man and taken to a mechanic with the intention to sell the car. The mechanic happens to be a friend of Acko's, who, displeased at the news of his car being stolen, suspects Jimmy's involvement.

Jimmy comes up with a plan to pay off the debt by robbing a bank the next day in along with two others. The night before he arranges to meet new friend and love interest Alex at a pub. Unfortunately the meeting's arrangements are heard by Les, a friend jealous of Alex's attraction to Jimmy and keen to get in with Pando's gang. After informing the gang of the couple's whereabouts, Jimmy is forced to flee the pub with Alex, attempting to escape on the , however the escape proves unsuccessful and Jimmy is taken to a remote location where the gang plan to kill him. Through the indirect intervention of Jimmy's dead brother (who acts as a guardian angel figure throughout the film), Jimmy is able to escape alive, and make his way back home to prepare for the bank robbery.

The robbery is not without its problems, as the getaway driver is killed by the police but is on the whole successful. Jimmy gets the money he needs, escaping in a stolen with his remaining accomplice. Ironically, the stolen auto's radio station bumper sticker is spotted by the station's competition team, and Jimmy wins a $10,000 prize. Not needing the money, and wanting to remain conspicuous after robbing a bank, he rams the station's Ford Explorer off the road.

Jimmy returns to Pando's office to pay off his debt, but thinking he has a gun the gang once again attempt to kill him. Luckily he is able to give them the money before he is killed, and is now offered more work by Pando for his impressive performance escaping the gang on their first attempt to kill him. Jimmy leaves in disgust after pulling a gun on Pando, and the movie ends with Jimmy and Alex buying tickets at an airport to a location 'up north', away from the pressures of life in Sydney. As Jimmy leaves, one of the street kids passes Jimmy, and in retaliation for the death of her friend shoots Pando and all his mates.

The Australian DVD released film ends as described above and does not feature any other type of ending as an extra or outtake on the DVD. However the televised version of the film featured a longer ending. Immediately after the scene with Jimmy and Alex purchasing their air tickets, is a scene where Jimmy’s brother Michael delivers a brief monologue completing the karmic message of the film. A beam of light shines down from the heavens and Michael attempts to run to the light, however he is grabbed by a series of hands which erupt from the ground and pull him back down into the earth that he escaped from in the opening introduction scene of the film.

The soundtrack featured the single "These Days", the video for which was compiled with footage from "Two Hands". Other songs were mostly contributed by Australian artists. also contributed original music to the soundtrack