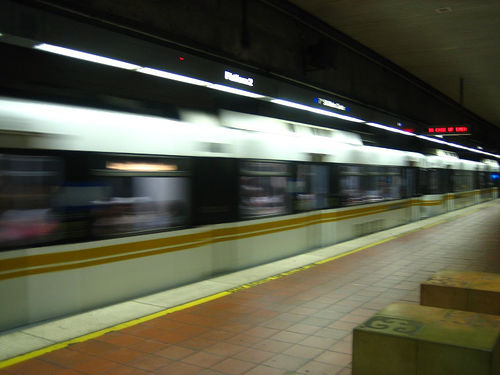 7th Street/Metro Center/Julian Dixon station in , serves as a major stop and transfer point for the system. It offers transfers to the Red Line and Purple Line subways, and serves as the terminus of the Blue Line line. It will also serve as the terminus of the Expo Line light rail upon its completion. In addition, it is a major stop for all buses on the , along with 3 lines, 28 lines, and commuter and local services from 9 other agencies. The station serves the businesses (and their many commuters) of Los Angeles's Financial District, in the heart of .

The station has two levels; the lower level is an serving the Red Line and Purple Line subways, while the upper level is a , serving the Blue Line light rail. The station is situated on West 7th Street, with entrances on the corners of 7th and Figueroa Street, 7th and Flower Street, and 7th and Hope Street.

The station's lengthy official name is colloquially shortened to "Seventh and Metro". The station's added surname honors California Congressman Julian Dixon who helped bring funding to the Metro Rail system; he died of a heart attack in 2000.

As part of the Regional Connector project, the Blue Line (and future Expo Line) will be extended from this station north through Downtown Los Angeles (via the Financial District and the Bunker Hill area) to connect with the future Little Tokyo Station on the Gold Line.

Nearby sights and attractions

Other Local and Commuter Services