This page lists details of the consumer price index by country

The CPI is calculated and posted monthly by the National Institute of Statistics and Census of Argentina.[1]

The CPI is calculated and posted quarterly by the Australian Bureau of Statistics.[2] Historical figures are available at the Reserve Bank of Australia website.[3]

Statistics Canada publishes the CPI on a monthly basis. It is obtained by comparing through time, the cost of a fixed basket of commodities purchased by consumers. Since the basket contains commodities of unchanging or equivalent quantity and quality, the index reflects only pure price movements.

Between 1913 and 1926 both the Department of Labour and the Dominion Bureau of Statistics (Statistics Canada) each produced separate CPI's, the former using a highly restrictive target population and the latter using the total population of Canada as the target. In the early 1920s, the Dominion Bureau of Statistics used the data collected by the Department of Labour to construct a monthly series beginning in January 1914. The present CPI series are descended from that set of indexes. Some component indexes in the CPI begin with the date they were introduced into the CPI. Data series at the level of urban centres were introduced in January 1971; province-level data series exist since September 1978.

Price movements of the goods and services represented in the CPI are weighted according to the relative importance of commodities in the total expenditures of consumers.

Samples in the price survey are obtained from a judgmental selection of geographical areas, representative commodities, and types and locations of retail outlets. There are about 600 commodities specified to represent the price movement in 168 basic commodity classes. Sample commodities are chosen on the basis of representativeness and expected continuous availability.

Over ninety percent of the price quotes used in the construction of the CPI are collected by personal visits to selected retail outlets.

Generally, factors affecting the quality of the CPI include: - the size and composition of the price samples of commodities and outlets - the accuracy of the expenditure estimates used to assign weights - the frequency and speed of updating of the contents and weights of the CPI basket - the effectiveness of error detection and correction, and imputation methods for missing data - the application of appropriate methods of adjusting for quality change of commodities in the CPI sample.

China's CPI is published by National Bureau of Statistics of China.[5]

The European Central Bank publishes the Harmonized Index of Consumer Prices (HICP). It is a weighted average of price indices of member states. It is a seasonally adjusted chained index in which goods are split by final consumption.

The index is calculated and published by Statistics Finland[8]

The index is calculated and published by the Federal Statistical Office of Germany (Statistisches Bundesamt), yearly and monthly results are available from 1991 onwards.[9]

The index is calculated and published by Statistics Iceland[10]

Wholesale Price Index (WPI) WPI first published in 1902, and was one of the more economic indicators available to policy makers until it was replaced by most developed countries by the Consumer Price Index in the 1970s. WPI is the index that is used to measure the change in the average price level of goods traded in wholesale market. In India, a total of 676 commodities data on price level is tracked through WPI which is an indicator of movement in prices of commodities in all trade and transactions. It is also the price index which is available on a weekly basis with the shortest possible time lag only two weeks.[11]

Iran's CPI is calculated by the Central Bank of Iran,[13]

Ireland's CPI is published by the Central Statistics Office Ireland.[14]

Italy's CPI is published by the Istat - Italian national statistical institute.[15] Historical data and chart about inflation in Italy

Hong Kong's CPI is published by the Census and Statistics Department.[16]

Malaysia's CPI is computed and published by the Department of Statistics Malaysia on monthly basis.[17]

The INPC, which stands for Indice Nacional de Precios al Consumidor (Consumer Price Index in English), is calculated and published on a monthly basis by Banco de México, the Central Bank.[18]

The CPI of New Zealand is calculated and published quarterly by Statistics New Zealand from prices gathered in a range of surveys at 15 urban areas.[19]

Norway's CPI is calculated and published monthly by Statistics Norway[20]

The index is calculated and published by Statistics Sweden[24]

The UK's CPI, 1988 to present; since the UK has had no periods of deflation it steadily rises. 2005=100.
Main article: Consumer Price Index (United Kingdom)

The traditional measure of inflation in the UK for many years was the Retail Prices Index (the RPI), which was first calculated in the early 20th Century to evaluate the extent to which workers were affected by price changes during the first world war. An explicit inflation target was first set in October 1992 by then-Chancellor of the Exchequer Norman Lamont following the departure of the UK from the Exchange Rate Mechanism. Initially, the target was based on the RPIX, which is the RPI calculated excluding mortgage interest payments. This was felt to be a better measure of the effectiveness of macroeconomic policy. It was argued that if interest rates are used to curb inflation, then including mortgage payments in the inflation measure would be misleading. Until 1997, interest rates were set by the Treasury.

On winning power in May 1997, the New Labour government handed control over interest rates to the Bank of England, whose Monetary Policy Committee now sets rates on the basis of an inflation target set by the Chancellor.[26] If in any month inflation is more than one percentage point off its target, the Governor of the Bank of England is required to write to the Chancellor explaining why. Mervyn King became the first Governor to do so in April 2007, when inflation ran at 3.1% against a target 2%.[27]

Since 1996 the United Kingdom has also tracked a Consumer Price Index figure, and in December 2003 its inflation target was changed to one based on the CPI.[28] The CPI target is currently 2%. Both the CPI and the RPI are published monthly by the Office for National Statistics. 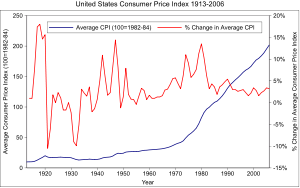 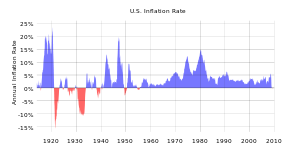 In the USA, CPI figures are prepared monthly by the Bureau of Labor Statistics of the United States Department of Labor.

The CPI-U includes expenditures by all urban consumers. The CPI-W includes expenditures by consumer units with clerical workers, sales workers, craft workers, operative, service workers, or laborers. Recently, the Chained Consumer Price Index C-CPI-U, a chained index, was introduced. The C-CPI-U tries to mitigate the substitution bias that is encountered in CPI-W and CPI-U by employing a Tornqvist formula and utilizing expenditure data in adjacent time periods in order to reflect the effect of any substitution that consumers make across item categories in response to changes in relative prices. The new measure, called a "superlative" index, is designed to be a closer approximation to a "cost-of- living" index than the other measures. The use of expenditure data for both a base period and the current period in order to average price change across item categories distinguishes the C-CPI-U from the existing CPI measures, which use only a single expenditure base period to compute the price change over time. In 1999, the BLS introduced a geometric mean estimator for averaging prices within most of the index’s item categories in order to approximate the effect of consumers’ responses to changes in relative prices within these item categories. The geometric mean estimator is used in the C-CPI-U in the same item categories in which it is now used in the CPI-U and CPI-W.

The CPI has powerful political ramifications, and administrations of both parties have been tempted to change the basis for its calculation. Especially since 1980, the definition of CPI has been altered repeatedly, though economists disagree whether the index underestimates or overestimates the true rate of decline in purchasing power.[29][30]

In 1996, the Boskin Commission found the CPI to be a biased measure, and gave a quantitative analysis of the bias. The Boskin critique helped to spur some changes in the U.S. CPI, although it was partially disputed by the BLS. Many of the changes were aimed at moving the CPI to a cost of living model which takes consumer substitutions into account and typically reduces the reported level of inflation.

Vietnam's CPI is computed and published by the General Statistics Office of Vietnam.[31]