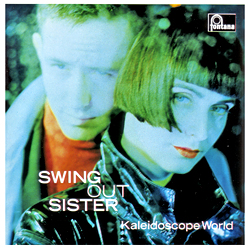 Kaleidoscope World is the second album by the British band . It was released in 1989 and features the singles "Where In The World?" (UK #47), "You On My Mind" (a UK #28 hit), "Forever Blue" (UK #80), and "Waiting Game". With the addition of an orchestra, this album featured a more sophisticated, /retro sound than their previous synth-oriented debut album "It's Better to Travel" (1987). The album reached no.9 on the UK album chart.

The album was notable for being released on the newly reactivated Polygram subsidiary label Fontana, which had been a highly successful record label in the 1960s (something reflected in the stylised cover art for Kaleidoscope World). The album also features solos from the veteran player .