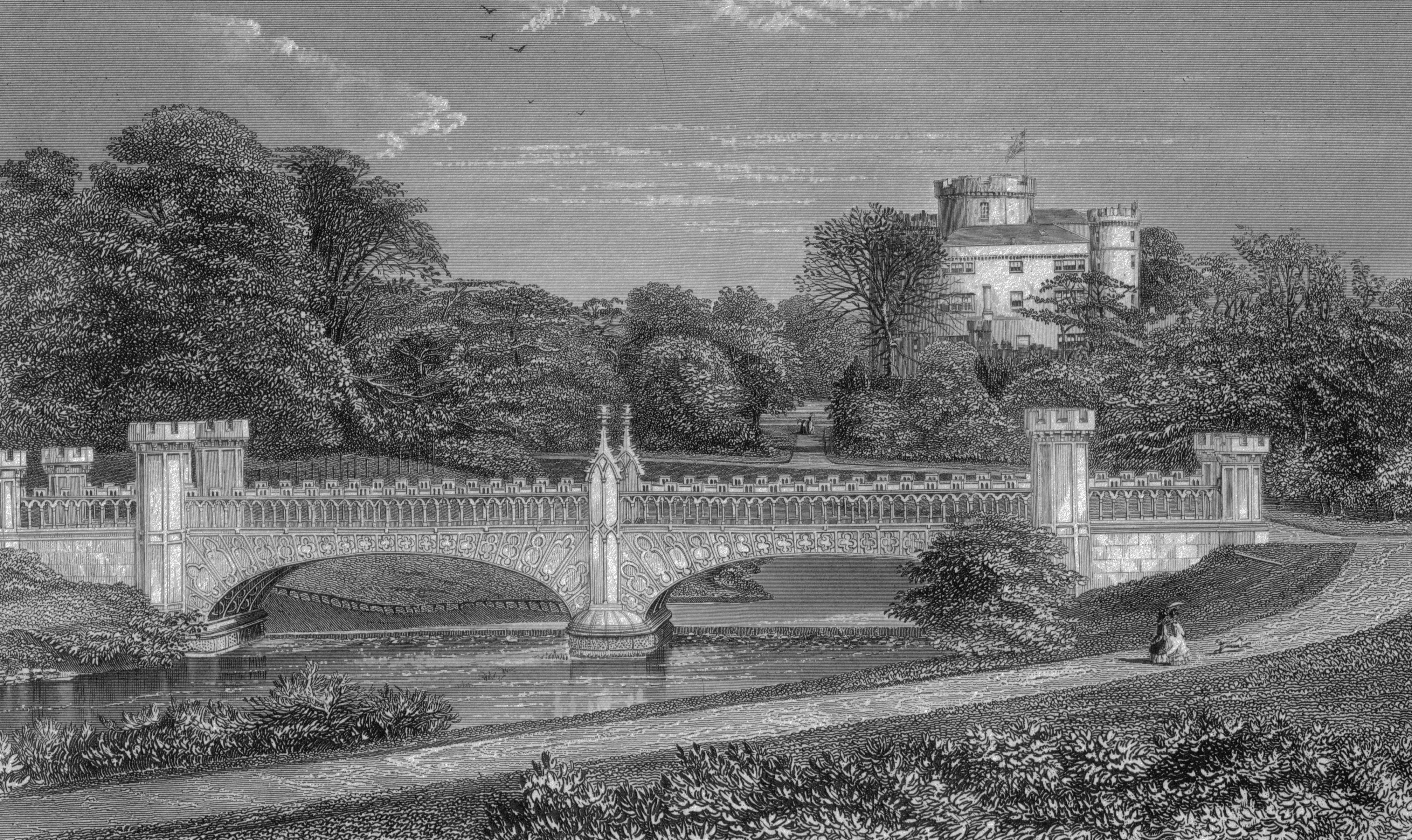 caption = Tournament Bridge and castle in 1876The Eglinton Tournament Bridge is a located within near , , . The bridge crosses the a short distance northwest of (OS ref: oscoor|NS32064224|NS32064224) and was named after the . The castle and surrounding grounds were once home to the Montgomerie family, Earls of Eglinton and chiefs of the .

The surviving Tournament Bridge was built to provide an appropriate crossing point to gain access to the far side of the . Archibald Montgomerie, the 13th had the bridge built in a Gothic style, using cast iron for the arches, pinnacles, etc. and stone for the two pairs of miniature ornamental towers at either end. These towers have subtle design differences (See photographs) which are significant in the context of the extended history of the bridge. This 'Tournament' bridge was designed by the architect David Hamilton. The bridge's cast iron is a repetition of the pointed Gothic arch design of the castle, surmounted by a battlement, and relieved in the centre with foliated s.

The Eglinton Tournament was held on a meadow or holm at a loop in the Lugton Water. Most of the holm no longer exists, the excavations in this area having provided gravel and sand for the construction of the Kilwinning bypass and leaving behind an excavation pit which is now known as Eglinton Loch. The Knights on horseback and their retinue reached the tilt yard ('C' on the map) via an enclosed ride ('G' on the map), whilst the guests and visitors made their way to the stands via the route marked 'F' on the map illustrated. Both groups crossed over the previous three arched Gothic bridge. A map of 1837 of "Eglinton Castle, Grounds and Tilt yard" of 1837 shows that the tilt yard was already in extistence at this early date, but it is not recorded what its fate was after the tournament was over.

The 'new' Tournament Bridge served as a well used route across the Lugton Water, running through the deer park to the Eglinton kennels (previously Laigh Moncur), especially on days when the Eglinton Hunt met at the castle itself. The original bridge, also with two miniature towers, but with three arches and four pinnacles, stood roughly 100 yards further up the river towards the castle, as shown in several contemporary prints and maps as illustrated in the appropriate gallery of this article.

Surviving architects drawings show the designs for a three arched bridge and as stated, contemporary prints of the Eglinton Tournament also show a three arched Tournament bridge, with cast iron arches, pinnacles and parapets which may have been re-used in the later 'new' bridge which survives today.

The point at which the 'old' bridge crossed the Lugton was 102 feet broad and 100 yards downriver from the castle.

Construction of the 'new' Tournament Bridge

The lower courses of ashlar

Examination of the top of the outer towers shows that something was attached to the centres, the 'plug' hole still being present. It is possible that the holes are relate dto the method of lifting them into position during construction work. The larger towers are capped with cement and nothing is therefore visible. During restoration work (2008) electricity power cables or possibly gas pipes were located leading to the bridge and they may have served lights on top of some or all of the towers.

The larger and taller inner towers appear to have been re-used from the older bridge, this being confirmed by the presence of ornate carving which is now obscured by the low wall leading to them from the smaller towers. The curtain walls and the smaller and lower outer towers are made from a different type of stone and, as stated, the towers have a number of architectural differences, suggesting that they were made specifically for the 'new' Tournament Bridge (See photographs). During work on the central pier it was found that some of the hidden infill work is vermiculate ashlar from the 'old' bridge.

The cast iron sections of the arches are numbered and some of the sequence are absent, suggesting that these missing sections may have been damaged previously beyond repair and were not used therefore in the 'new' bridge.

The Tournament Bridge and WWII

The Eglinton Castle Estate was requisitioned during and during this occupation the Tournament Bridge partly collapsed, partly due to alterations which had been made earlier by the Eglinton Estate, involving supposed strengthening using brickwork, as revealed during the 2008 restoration work.

Originally the river would have been crossed by simple fords, however by the 18th century ornamental pleasure gardens had been formed and these were partly situated in what later became the deer park. No signs of these gardens are now visible, apart from s on aerial photographs taken around the end of the Second World War. A bridge was necessary to give access to the ornamental gardens and one is indicated on John Ainslie's map dated 1790, crossing the Lugton Water close to the castle itself. A small wooden bridge across the Lugton Water is shown in an illustration from around 1815, however this may not have been across the Lugton Water. Thomson's map of 1828 (See illustration) indicates a bridge crossing the Lugton Water at the castle where the three arched bridge was and a drive starting off at the position of the present day bridge, which may have been a ford at the time. Another bridge is suggested further upstream and close to the castle.

The Suspension Bridge built by the army in the 1980s on behalf of the country park lies just below the weir beside the ruined gazebo. Lady Jane's cottage had a wooded pedestrian footbridge of which no sign remains.

The restored Diamond Bridge lies upstream near the Eglinton Loch and continues to give access to the old Toll Road from Irvine to Kilwinning via . This bridge was named after the nearby Black Diamond mine, the spoil heap or bing of which still remains rear the Chapelholm Gate. The colliery name in turn was associated with one of the 13th Earl's favourite horses, Black Diamond.

A Gallery of the other bridges

The size, shape and position of the various weirs was altered several times, latterly by Clement Wilson of the canning factory. One of the weirs lies directly beneath the restored Tournament Bridge. The one below the site of the old and 's garden was 'U' shaped, holding back sufficient water at one time to form a lake with a small island bearing a single tree. The 1938 OS map shows no fewer than seven weirs between the castle and the present day Suspension Bridge.

In 1948 the Trustees of the late 16th Earl sold most of the remaining parts of the estate to Robert Howie and Sons of for £24,000

Clement Wilson, the food processing factory owner, established the Clement Wilson Foundation which opened part of the grounds to the public, spending around £400,000 (around £4,317,000 in 2008 terms) on partially restoring the Tournament Bridge, consolidating the castle ruins, planting trees, landscaping, making paths, creating a rockery and waterfall feature, etc.

The restoration of the Tournament Bridge involves a faithful and historic renovation of the Tournament Bridge, based on surviving documentary evidence. requires a ‘faithful restoration where all details are replicated as closely as possible in terms of material, design and construction’.The existing concrete arches are to be removed as is the infill above. The arches will be replaced with the existing refurbished cast iron arch sections and new cast iron fascia sections, which will restore the original width of the structure. A secondary stainless steel pedestrian parapet is to be provided immediately behind the ballustrading. The load bearing capacity of the bridge will be carried by a modern steel structure concealed beneath the deck surface which will be timber, as this was considered to be the original material.

The current timber parapets will be replaced with cast iron sections to match the original items. All of the cast iron elements are to be fabricated and fitted by the Ballantine Iron Company to restore the splendour of the original structure.

The restoration involved to expose the cast iron arches through removing the concrete in which they had been embeded. This process used very high pressure water jets and confirmed the poor structural integrity of the iron arches. They were not however intended to be load bearing in the restored bridge and an upside was the degree of Gothic artwork found to exist on the arches.

The estimated total project cost is £720k. Historic Scotland have indicated that they would be able to contribute some £161k, around £5k will be provided in kind, and the shortfall of £354k was the subject of the successful grant application to the .