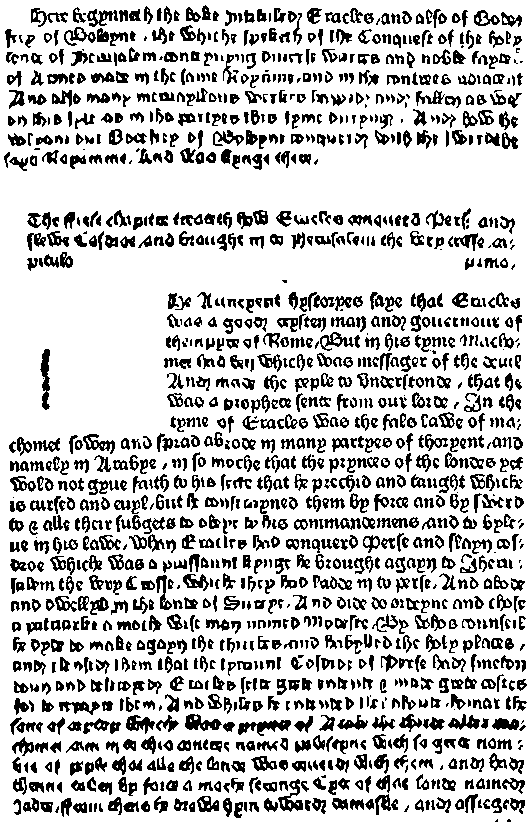 thumb|Facsimile of page 1 of "Godefrey of Boloyne", printed by Caxton, London, 1481.----">The Prologue, at top of page, begins: "Here begynneth the boke Intituled Eracles, and also Godefrey of Boloyne,the whiche speketh of the Conquest of the holy lande of Jherusalem." The blank space on this page was for the insertion by hand of an illuminated initial T. William Caxton (c. 1415~1422 – c. March 1492) was an English , , and printer. He was the first English person to work as a printer and the first person to introduce a into England. He was also the first English retailer of books (his London contemporaries were all Dutch, German or French).

In 1446, he went to , where he was successful in business and became governor of the Merchant Adventurers. His trade brought him into contact with and it was thus that he became a member of the household of , the sister of the English King. This led to more continental travel, including travel to , in the course of which he observed the new printing industry, and was significantly influenced by German printing. He wasted no time in setting up a printing press in Bruges in collaboration with a Fleming, , on which the first book to be printed in English was produced in 1473: "", [STC 2nd ed item 4920] a translation by Caxton himself. Bringing the knowledge back to his native land, he set up a press at in 1476 and the first book known to have been issued there was an edition of 's "Canterbury Tales" (Blake, 2004-7). Another early title was "Dictes or Sayengis of the Philosophres" ("Sayings of the Philosophers"), first printed on , , written by Earl Rivers, the king's brother-in-law. Caxton's translation of the "", published in 1483, and "", published 1484, contain perhaps the earliest verses of the Bible to be printed in English.

Caxton produced chivalric romances, classical-authored works and English and Roman histories. These books strongly appealed to English upper classes around the end of the fifteenth century. Caxton was supported by, but not dependent on, nobility and gentry.

The most important works printed by Caxton were "", "" and 's "Canterbury Tales". He produced two editions of the latter.

Caxton's precise date of death is uncertain, but estimates from the records of his burial in St Margaret's, Westminster, show that he died in about March 1492.

Caxton was not without his detractors. There was widespread unease amongst the merchant class of the time, who felt that if the printed page were to become widely available to the population, then it might filter through to the poor. The poor, it was believed, might then "become aware and enlightened of their circumstances"Fact|date=May 2008 and, ultimately, dissatisfied and aggrieved. This, it was felt, might lead to unrest and civil disturbance.Fact|date=May 2008

In challenging the wisdom of his critics, Caxton announced: "If tis wrong I do, then tis a fine and noble wrong".Fact|date=May 2008

Caxton and the English language

However, the English language was changing rapidly in Caxton's time and the works he was given to print were in a variety of styles and dialects. Caxton was a technician rather than a writer and he often faced dilemmas concerning language standardisation in the books he printed. (He wrote about this subject in the preface to his "Eneydos". [ [http://www.bl.uk/treasures/caxton/english.html Caxton's Chaucer - Caxton's English ] ] ) His successor faced similar problems.

Caxton is credited with standardising the English language (that is, homogenising regional dialects) through printing. This was said to have led to the expansion of English vocabulary, the development of and and the ever-widening gap between the spoken and the written word.

However, , who started printing in London in 1491 or 1492 and who favoured , was a more accomplished stylist and consequently pushed the English language further toward standardisation.

It is asserted that the spelling "ghost" with the silent letter "h" was adopted by Caxton due to the influence of Dutch spelling habits.

*N. F. Blake, "Caxton, William (1415~24–1492)", "Oxford Dictionary of National Biography", Oxford University Press, 2004 [http://www.oxforddnb.com/view/article/4963, accessed 1 July 2006]
* [http://charlemagne.celtic-twilight.com/caxton_ch/index.htm The English Charlemagne Romances] , Parts III and IV, The Lyf of the Noble and Crysten Prynce Charles the Grete, Translated from the French By William Caxton And Printed By Him 1485.
* [http://www.bartleby.com/212/1303.html The Introduction of Printing into England and the Early Work of the Press: The First Book printed in English] (1907), from , Vol II
* [http://www.bartleby.com/212/1307.html Caxton's Views on the English Language.]
* [http://www.cts.dmu.ac.uk/Caxtons Caxton's Canterbury Tales: The British Library Copies] Images and full transcripts of the whole of Caxton's two editions of Geoffrey Chaucer's "Canterbury Tales"; a fuller version of this is published on CD-ROM by [http://www.sd-editions.com Scholarly Digital Editions]
* [http://www.classicistranieri.com/english/1/0/6/7/10672/10672-h/10672-h.htm Game and Playe of the Chesse] A Verbatim Reprint of the First Edition, 1474