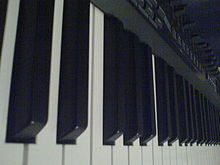 A MIDI keyboard is typically a piano-style user interface keyboard device used for sending (MIDI) signals or commands over a USB or MIDI cable to other devices connected and operating on the same MIDI protocol interface. This could also be a personal computer running software such as a digital audio workstation (DAW) that listens to and sends MIDI information to other MIDI devices connected by cable or running internal to the personal computer system. The basic MIDI keyboard does not produce sound. Instead, MIDI information is sent to an electronic module capable of reproducing an array of digital sounds or samples that resemble traditional analog musical instruments. These samples or waveforms are also referred to as voices or timbres.

Not all MIDI keyboards are based on the piano style user interface. Many MIDI keyboard controllers have pads or buttons that also send MIDI signals, and most pads have a velocity sensing capability so that varying volumes of sound can be played/voiced. Another such keyboard device is the Continuum Fingerboard which is based on a "fretless" type keyboard interface enabling portamento style note changes at will during play.

An illustration of the Continuum Fingerboard.

Another MIDI keyboard implementation is the Tonal Plexus keyboard that provides for up to 1266 different tonal pitches possible in the TPX6 1266 Keys (Microtonal MIDI Controller). There are numerous other MIDI controllers that are also not based on the piano style user interface, but on newer interfaces with broader application possible because of computer technology.

In the MIDI protocol used in each of these midi controllers, an encoding scheme is used to map a MIDI value to a specific instrument sample. Also, other sound parameters such as note volume (velocity), aftertouch, pitch bend and modulation controls are also included in the MIDI protocol scheme. The keyboard merely acts as a MIDI controller of sound modules and other MIDI devices, including activating sounds by MIDI control within DAW software.

MIDI keyboards are a very common feature of a recording studio, and any DAW setup. Most include a transpose function and the ability to set different octaves. Many MIDI keyboards have pitch bend and modulation wheels. Some also have extra sets of assignable rotary knobs and/or buttons for sending custom MIDI messages to the synthesiser, sampler or DAW software. Devices with extra features (also including rhythm input, instrument selection, transport control) are sometimes called keyboard controllers.

Other features that some MIDI keyboards might include are:

MIDI keyboards come in a range of sizes, from 25 keys (two octaves) to full 88-key length. MIDI keyboards with fewer than 61 keys tend not to have weighted keys.