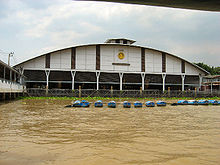 Royal Barge National Museum is a museum in Bangkok, Thailand. It is located on the northern rim of Bangkok Noi canal within Bangkok Noi district.

Some historical royal barges of the Royal Barge Procession are kept at the museum.