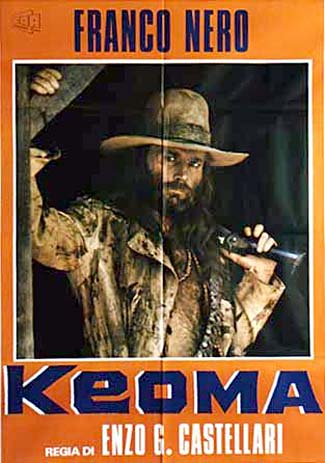 "Keoma", also released in various counties under the titles "Django Rides Again" and "The Violent Breed", is a 1976 film directed by and starring and . "Keoma", one of the last notable films of its genre, is considered by some to be one of the finest spaghetti westerns ever made, with its scenes of slow motion, gun fights, an anti hero and musical soundtrack. [ [http://uas.alaska.edu/pub/filmasart/keoma.html "Film as Art: Danél Griffin's Guide to Cinema"] ] The film follows the plot line of "Django" (1966), also starring Franco Nero.

Keoma (Nero) returns back to his home town to find his brothers have sided with an outlaw, and with the help of his father, a family friend he vows revenge. Keoma also saves a dying woman from a mine full of plague victims.