David Nasmith (March 1799-25 December 1839) founded The City Mission Movement in the UK, the US and in Europe.

Born in Glasgow Scotland in March 1799, Nasmith commenced working in manufacturing as an apprentice. Nasmith set up the The Young Men's Society for Religious Improvement (1824)[1] , Glasgow City Mission (1826), Edinburgh City Mission (1832), and London City Mission (1835). He "died poor" at the young age of 40 on Christmas Day 1839 at Guildford, Surrey, England. 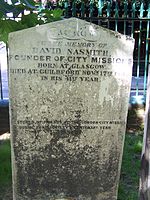 "David Nasmith originated the Young Men’s Christian Association in Glasgow, and set the institution at work in other cities and around the world. His life work was noted for being instrumental in welding the various denominations together for useful purposes. In 1821 he became secretary of the “Religious Societies of Glasgow” at the “Institution Rooms,” 59 Glasswork Street. Nasmith possessed a marvelous power of organization and capacity for work. He was a true reformer, and thoroughly sincere in his endeavors to benefit others. He founded City Missions and Young Men’s Christian Associations". (A. G. Callant, author of Saint Mungo's Bells)[2]

"Clubs and associations, missions and societies were in his blood. So many of them could claim him as founder that it is doubtful whether, at the age of thirty-six, he could have kept an accurate record of them all. As a founder of missions, it would be hard to find his equal." (Phyllis Thompson, author of To the Heart of the City)[3]

Unlike other reformers, no church or college has been named after Nasmith. No church doctrine or point of theology is attributed to him.[citation needed] What can be found all over the world is the fruit of his vision in the form of City Missions, practical religion outside the walls of the church.