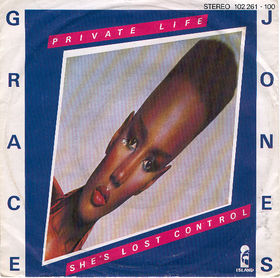 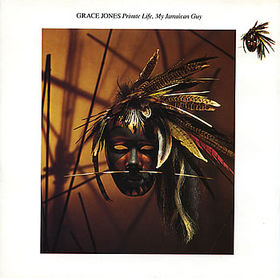 "Private Life" is a song written by , included on ' eponymous 1979 debut album. The following year the track was covered by on her first post-disco album "Warm Leatherette", recorded at the in the with among others . In the liner notes to Island Records' 1998 compilation "" Hynde is quoted as saying; " - Like all the other London punks, I wanted to do reggae, and I wrote "Private Life". When I first heard Grace's version I thought 'Now that's how it's supposed to sound!' In fact it was one of the highpoints of my career - what with Sly and Robbie being the masters, and Grace Jones with her scorching delivery. Someone told me it was 's idea - thanks Chris!" "Private Life" was released as the third single from the "Warm Leatherette" album but it became the single that marked a new era in Jones' career as she left her disco persona behind her and began exploring genres like reggae, rock and new wave, combined with an entirely different image and it in fact became Grace Jones' first ever chart entry in the U.K., peaking at #17. The single's B-side was a non-album track; "She's Lost Control", originally recorded by . Both tracks were remixed and re-edited for the 7" single and both of these mixes have yet to be released on CD. In The Netherlands the B-side was the French language "Pars" from the "Warm Leatherette" album. [ [http://www.discogs.com/artist/Grace+Jones/] [ [http://rateyourmusic.com/release/single/grace_jones/a_rolling_stone//] In Germany, "La Vie En Rose" was re-issued as a follow-up single to "Private Life" whereas the UK and the Netherlands preferred "".

The original video for this song presented the famous Grace Jones mask for the first time. The entire video shows Grace's face in close-up, her taking the mask off and on and off again, singing straight into the camera and it is filmed in one take without any cuts. [http://www.youtube.com/watch?v=thtQngqG4vg&feature=related] The song was later also featured in Jones' "", then as an on-stage performance.