The Other Conquest (La Otra Conquista)

The Other Conquest (La Otra Conquista) 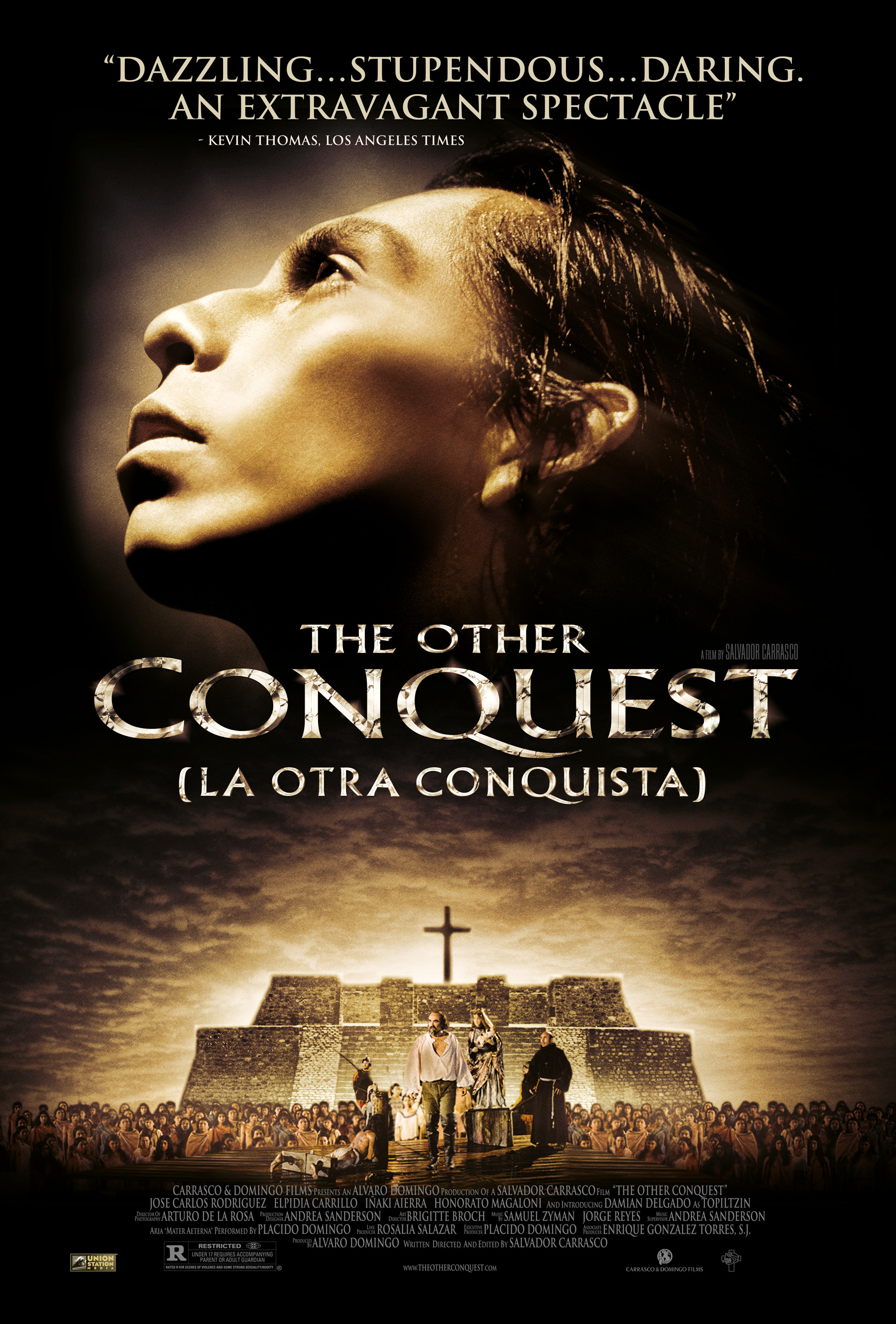 "The Other Conquest" (Spanish: "") is a 2000 Mexican feature film written and directed by , produced by Alvaro Domingo, and executive produced by world-renowned .

The film is an epic yet intimate drama about the aftermath of the told from the perspective of the indigenous people. It explores the social, religious, and psychological changes brought about by a historical process of that both defined the American continent and is also highly reminiscent of today’s . It is regarded by top critics (e.g., Kevin Thomas [http://pqasb.pqarchiver.com/latimes/access/52757232.html?dids=52757232:52757232&FMT=ABS&FMTS=ABS:FT&type=current&date=Apr+19%2C+2000&author=KEVIN+THOMAS&pub=Los+Angeles+Times&desc=Movie+Review] , Richard Nilsen [http://www.azcentral.com/arizonarepublic/preview/articles/0601conquest0601.html#] , Larry Ratliff [http://www.mysanantonio.com/entertainment/columnists/lratliff/stories/MYSA050407.WK.conquest.be84c4.html] , among others) as one of the best cinematic explorations on the effects of colonization and also "one of the more astonishing feature film debuts in recent memory" [http://www.cinescene.com/reviews/laotraconquista.html] . "The Other Conquest" stands alone in its depiction of the unique and complex fusion that took place between the brought to by the and the Aztec beliefs of the indigenous natives.

Tagline: "The spirit of a people can never be conquered."

It is May 1520 in the vast , one year after the Spanish Conqueror arrived in Mexico. "The Other Conquest" opens with the infamous massacre of the Aztecs at the Great Temple of (what is now called ). The sacred grounds are covered with the countless bodies of priests and nobility slaughtered by the Spanish armies under Cortés's command. The lone Aztec survivor of the massacre is a young Indian named (Damián Delgado). Topiltzin, who is the illegitimate son of the Aztec Emperor , survives the onslaught by burying himself under a stack of bodies. As if awakening from a dream, the young man rises from among the dead to find his mother murdered, the Spanish in power, and the dawn of a new era in his native land --a New World with alien leaders, language, customs... and God. Representing the New Order is the Spanish Friar Diego (José Carlos Rodríguez). His mission is to convert the "savage" natives into civilized Christians; to replace their and feathered deities with public Christenings and fealty to the Blessed . With Topiltzin, Friar Diego faces his most difficult spiritual and personal challenge, for when Topiltzin is captured by Spanish troops and presented to Cortés (Iñaki Aierra), the Spanish Conqueror places Topiltzin's under Friar Diego's care. Old world confronts the New as Topiltzin struggles to preserve his own beliefs, whilst Friar Diego attempts to impose his own. Moreover, throughout the film, a fundamental question arises: Who is really converting whom?

On November 8, 1519 the Spanish Conqueror Hernando Cortés and his small army rode into the Aztec capital of the vast Mexican Empire, where they were welcomed by the Emperor Moctezuma. Within two years, the Aztec civilization was in a state of orphanage, the survivors having lost their families, homes, language, temples... and Gods

"The Other Conquest" opens in May 1520 when Topiltzin (Damián Delgado), a skillful Aztec scribe who is one of Moctezuma's illegitimate sons, survives the Massacre of the Great Temple by hiding under a corpse. After the Spaniards leave the sacred site, he finds his people dead, including his mother.

By 1526 Topiltzin is still striving to preserve the cult of , based upon the Aztec . When a squadron commanded by Captain Cristóbal (Honorato Magaloni) and Friar Diego (José Carlos Rodríguez) discover the clandestine human sacrifice of a beautiful Aztec princess, two incompatible ways of life come face to face... and violence erupts. Topiltzin manages to escape by making Friar Diego believe he is drawn to the statue of the Virgin Mary that accompanies the Spaniards wherever they go. He is eventually captured and presented to Hernando Cortés (Iñaki Aierra), who has just returned from an ill-fated campaign to Las Hibueras (today's ). In an attempt to create a hybrid empire, Cortés has taken Emperor Moctezuma's daughter and heiress, the notorious (Elpidia Carrillo), as his new mistress and interpreter. She reveals that Topiltzin is her half-brother, and a skeptical Cortés spares the young man's life, but in turn decides to convert him to the new Spanish ways with the aid of Tecuichpo (from now on, Doña Isabel) and Friar Diego. After being subject to a brutal ritual of conversion, Topiltzin (now called Tomás) is confined in the Franciscan Monastery of Our Lady of Light.

Five years later (1531), under the tutelage of Friar Diego, Tomás is struggling to reconcile two worlds which could hardly be more different but which also share some basic truths. However, Friar Diego realizes that Tomás and Doña Isabel are forging Cortés's correspondence with Charles V, King of Spain. Things become even worse when Friar Diego discovers them making love inside the monastery, in a desperate attempt to perpetuate their race. Friar Diego takes it upon himself to save Tomás's soul, and asks Cortés to keep Doña Isabel from returning to the monastery. A pregnant Doña Isabel is secluded in a dungeon.

The overwhelming absence of his half-sister erodes what is left of Tomás's world. He falls into a state of desolation and illness. A well-meaning Indian nun () applies medieval remedies to him, but these only help turn his feverish attacks into that merge Christian and Aztec imagery. Tomás has a vision whereby the Virgin Mary is revealed as the Aztec Mother Goddess.

The arrival of the statue of the Virgin Mary in the monastery, a token of gratitude from Cortés to Friar Diego, now causes Tomás to become genuinely drawn to the statue as a substitute for all he has lost, and he sets on a personal crusade to conquer her. If he absorbs her powers, if he fuses with her, redemption will follow.

Is the Indian's conversion real? Or is Tomás trying to retain his own beliefs under the guise of the new creed? Will he be able to survive with his sanity intact? These questions start revolving in Friar Diego's head, and although he puts many obstacles to keep Tomás from entering the sacristy and consummating his obsession with the statue, he finally allows Providence to decide whether Tomás's mission is legitimate or not. So who is in fact converting whom? Maybe the greatest mystery in the history of beliefs is how certain unorthodox encounters make us continue believing...

"The Other Conquest" broke box-office records upon its 1999 release in Mexico by , "enjoying the biggest opening weekend of any Mexican film in history on its home turf." [http://movies2.nytimes.com/gst/movies/movie.html?v_id=181050 (The New York Times)] When it was released in Los Angeles the following year, it grossed 1 million dollars [http://indie.cinematical.com/tag/The+Other+Conquest/] and was selected as one of ’ Top 10 Films of 2000. [http://www.geocities.com/Hollywood/Theater/6696/Lists/00top10t.htm] In the summer of 2007, the film was re-released in select cities across the United States and it made its long-awaited debut on DVD [http://www.amazon.com/dp/B000UVV24M] in October 2007. Bonus materials include director-writer Salvador Carrasco’s commentary and 15 deleted scenes.

The idea for "The Other Conquest" came to director Salvador Carrasco, a native of Mexico City, during his final years as a film student at New York University's , specifically on August, 13, 1991, the 470th anniversary of the fall of , the Aztec capital. “Living in at the time, I found myself more sensitive to such dates. Trying to imagine what it might have been like back then, it occurred to me that in the face of military defeat and the ensuing losses, an Aztec Indian could resist the Spanish Conquest by carrying out his own form of spiritual conquest --i.e., through ‘conquering’ or absorbing the powers of a statue of the Virgin Mary, in whose name his oppressors were ruling, he’d be able to redeem himself and his people. Needles to say, it is no coincidence that the patron saint of Mexico is the , a Virgin Mary with indigenous features. This singular image became the launching point for a short screenplay I began to write, which later evolved into "The Other Conquest".” - Salvador Carrasco.

It was at where Carrasco met his friend and future producer, Alvaro Domingo, son of legendary tenor Plácido Domingo. After an intense period of research, Carrasco developed a script centering on a young Aztec scribe and his forced conversion to at the hands of Spanish invaders. Domingo was immediately taken in with the story after Carrasco presented it to him at a restaurant in Mexico City, and it was his idea to take the short film idea and expand it into a full-length feature film. Domingo says, “I just fell in love with the story right then and there. We resolved to create our own company, Carrasco & Domingo Films, using it as a platform to take the plunge together.”

Getting funding for the project proved to be a tough road; the film was first rejected by three different administrations of the Mexican Institute of Cinema (IMCINE). Carrasco was even berated by some for wanting to cast a pure indigenous actor in the lead role. After the initial rejections, Carrasco and Domingo sought independent financing, including from Plácido Domingo himself, who served as Executive Producer of "The Other Conquest". Of the film Plácido Domingo has commented, “What makes this film so unique is its message of cultural tolerance --something so much needed in today’s world.” Seed money also came from Mexican Manuel Arango, who had also sponsored Carrasco’s film studies in New York. More funding came from private investors and Mexican public institutions.

Casting began with an eye towards the authentic and Carrasco searched the world over for his ideal cast. “I wanted actors not only to appear as if they belonged in 16th century Mexico, but also to embody the prevailing values of the time,” remembers Carrasco.

It wasn’t long before the perfect actor to embody the film’s lead character, Topiltzin, was found. Damián Delgado, a native of , had made a career as a professional theatrical dancer.

Filming lasted about seven years, due to funding and even domestic political and economic issues Mexico faced during the 1990s. “Those were three hard years of carting around a VHS videotape with 35 minutes worth of an unfinished film. Three hard years of a great uncertainty, wondering whether we’d be able to complete this film, though deep in my heart, I always knew we would.”- Alvaro Domingo.

Salvador Carrasco has also commented on the feeling of being a young, opera-prima director attempting to accomplish a major work: “ We needed to dispel certain notions that a film like this couldn’t be made; that first-timers like ourselves couldn’t accomplish something as ambitious as this. We needed to prove that we could…to others, and to ourselves.”

Shooting took place in many diverse, original locations including the pyramid of Tenayuca (in the heart of Mexico City), the archaeological site of and the Hacienda de Santa Mónica. Carrasco’s wife, Andrea Sanderson, a -trained violinist, joined the production team and especially helped with the film’s impressive . “Andrea and I must have visited every possible archaeological site within a 300-kilometer radius of Mexico City,” remembers Carrasco. “We were looking for an intimate, timeless setting with distinctive architecture, far away from the metropolis, where clandestine rituals could have taken place without the Spaniards knowing.” Colonial plazas and even underground caves were also discovered and used to great effect in the film, giving it a rare, convincing air of complete authenticity.

For the film’s lush, evocative music score, Salvador Carrasco approached classical composer Samuel Zyman and Jorge Reyes, renowned for his work in original indigenous music. Plácido Domingo contributed by performing an aria, “," with music by Zyman and lyrics by Carrasco, that plays during the end credits.

[http://pqasb.pqarchiver.com/latimes/access/53178378.html?dids=53178378:53178378&FMT=ABS&FMTS=ABS:FT&type=current&date=Apr+29%2C+2000&author=LORENZA+MUNOZ&pub=Los+Angeles+Times&edition=&startpage=2&desc=History+(and+Some+Marketing)+Conquer+Box-Office+Adversity%3B+Movies+*+High+audience+turnout+for+the+Mexican+epic+%27The+Other+Conquest%27+follows+a+careful+marketing+strategy+with+a+crossover+appeal. Los Angeles Times article on high-audience turnout for "The Other Conquest"]

[http://pqasb.pqarchiver.com/latimes/access/52644941.html?dids=52644941:52644941&FMT=ABS&FMTS=ABS:FT&type=current&date=Apr+14%2C+2000&author=DON+HECKMAN&pub=Los+Angeles+Times&edition=&startpage=24&desc=World+Music+Review%3B+Jorge+Reyes%3A+Think+of+Him+as+a+One-Man+Cultural+Bridge Los Angeles Times article on soundtrack of "The Other Conquest"]

[http://www.udel.edu/LAS/Vol6-2Juan-Navarro.html Santiago Juan-Navarro. "Between El Dorado and Armageddon: Utopia and Apocalypse in the Films of the Encounter" Delaware Review of Latin American Studies; Vol. 6, No. 2; January 15, 2006]