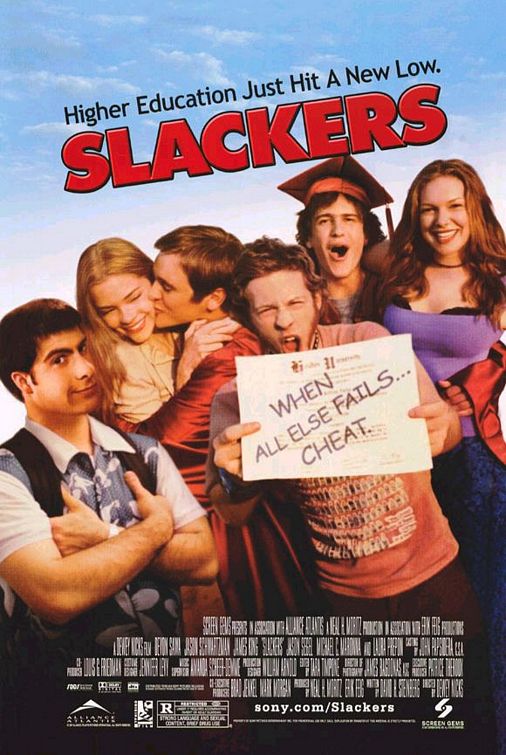 
"Slackers" is a comedy movie directed by Dewey Nicks and stars , , and .

Dave (), Sam () and Jeff () have lied, cheated and schemed their way through college. The three roommates are about to graduate from Holden University when nerdy Ethan () accidentally catches Dave cheating on an exam. The three roommates have proudly scammed their way through the last four years of college and now, during final exams, these big-men-on-campus are about to be busted by the most unlikely dude in school. The trio are now completely at "Cool" Ethan's mercy. Ethan offers a deal: he’ll let the guys off the hook on the condition that they use their unethical expertise to get him the object of his desire, the brainy babe Angela (), whom Ethan's been . Dave, Sam and Jeff agree to the plan, thinking it will be easy. They promptly return to their usual antics: drinking beer, picking up girls and paying smarter students to take their tests for them.

There are just two problems: firstly, "Cool" Ethan’s experience with women is minimal, to say the very least, and perhaps more problematically, when Dave meets the incredible Angela he starts to fall for her himself. Ethan soon discovers that despite Dave’s help and his own pathetic attempts at seduction, Angela isn’t interested in him – she’s falling for Dave.

Refusing to see the writing on the wall, Ethan, enlisting the help of Sam and Jeff, proceeds to sabotage Dave and Angela's relationship, and in a final, desperate attempt to insinuate himself, turns to Angela afterward, providing her with ‘a shoulder to cry on.’ To further his revenge, "Cool" Ethan also cancels the deal, announcing that they're all going down, putting all of their futures at risk. However, "Cool" Ethan has underestimated this trio.

Although critics generally panned the film (it has a 9% rotten rating on ) it seems to have a strong , as its DVD sales have been quite successful and it enjoys regular replay on .