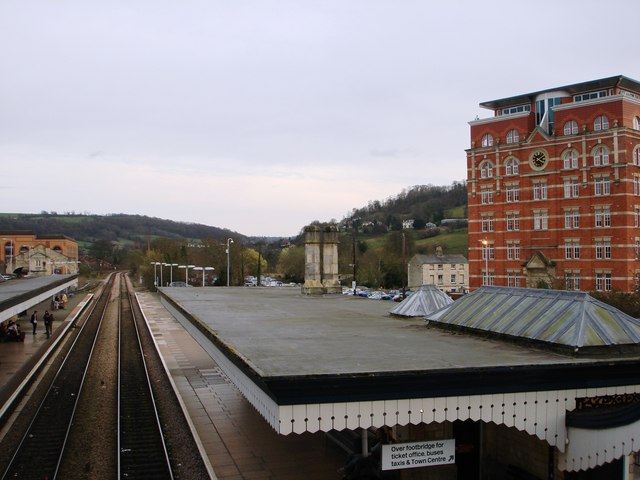 Stroud railway station is a that serves the town of Stroud in , . The station is located on the - "Golden Valley" line. It was opened on 12 May 1845 with the opening of the Kemble to section of the , later part of the . For a period between 1886 and 1947 when Stroud had two passenger railway stations, it was known as Stroud Great Western, Stroud Russell Street or Stroud Central. Stroud's second station, Stroud Wallgate, was the terminus of a short branch line from the 's , and freight services were always more important there than passengers. [Cite book
author = Mike Oakley
title = "Gloucestershire Railway Stations"
edition = 2003
publisher = Dovecote Press, Wimborne
ISBN = 1 904349 24 2
page = pp128&ndash;129] A detailed and interesting history of the Swindon-to-Gloucester line can be found at: http://homepage.ntlworld.com/davidlloyd/CGWURLYHOME.htm

Service to Stroud could be improved if the line were redoubled between Swindon and Kemble. The 12 miles of second track was removed in the summer of 1968. Network Rail has examined this option, and put the cost at £32million. The 2007 Network Rail business plan mentioned the Swindon/Kemble redoubling as expected in September 2009. However, the Office of Rail Regulation has now decided against including the redoubling in Network Rail's 2009-2014 plans for trackwork. Instead, £51million is to be spent on redoubling parts of the Oxford to Worcester line. The N.R. 2009-2014 plans are still in draft, and the Office of Rail Regulation is accepting submissions until 4 September 2008 on amending the plans. All of the Cotswolds' MPs are presently (August 2008) involved, along with Gloucester County Council, Network Rail and First Great Western in bringing forward a submission to the O.R.R. on including Swindon/Kemble redoubling in the 2009-2014 plans. Further information on this is available at the Gloucestershire Transport website: http://www.visit-gloucestershire.co.uk/boards/ under the article 'Swindon/Kemble Bottleneck'; see, in particular, post #106 for information on writing to the O.R.R. The recent (30 June 2008) Parliamentary debate on the Swindon/Kemble redoubling can be read at: http://www.theyworkforyou.com/debates/?id=2008-06-30a.703.0&m=1494

Stroud station is served on a Monday to Friday by:

The Greater Western Franchise's new timetable came into effect from 11th December 2006. Thanks to First Great Western, Stroud has benefited from an almost hourly clockface timetable throughout the day Monday to Friday, instead of the large and small gaps between services which can be seen in the previous timetable.Fact|date=May 2007

The station does have a ticket office, located on the Swindon bound platform, which is open for the majority of the day, seven days a week:

At times when the ticket office is closed, the station is unmanned.