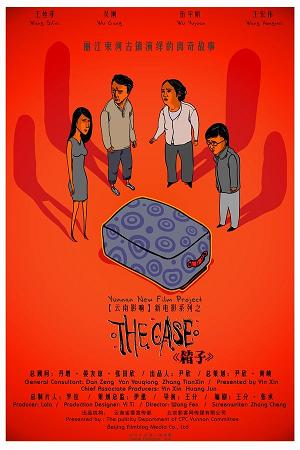 
"The Case" is a 2007 Chinese film directed by the female first-time director, . It is the first film of the ,

"The Case" follows an innkeeper, played by , who won day comes across a black suitcase floating in the river, only to discover that it contains the body, finely dismembered and frozen.

He Dashang () is a middle-aged childless innkeeper trapped in an unhappy marriage in a sleepy city in Yunnan, China. Sleepwalking through his days, everything changes when he spies a black suitcase floating down the river. Retrieving it, Dashang hopes to find his fortune in the mysterious case, only to discover its contents are dismembered human body parts. Thrown into panic, he attempts to hide the contents. Things become even more complicated when a young couple, the sultry Lily (), and her mousy husband () arrive at the inn.

Soon mishap follows upon mishap as He Dashang finds himself over his head.

* as He Dashang, a middle-aged inn-keeper living in Lijiang.
* as He Dashang's wife.
* as Lily, a beautiful woman who claims her car broke down and needs to use He Dashang's inn.
* as Lily's mousy husband.
*Tang Wei as Lijiang's local police chief and Wu Gang's brother-in-law.

The film began production on , in the small city of Lijiang, in the Shuhe Old Town district.

Despite being actress Wang Fen's first feature film, "The Case" received fairly positive reviews upon its release, particularly among the Western press. "Variety" for example, called it an "impressive first feature," with special attention being paid to Wu Gang's "marvelous" portrayal as He Dashang, the innkeeper. [cite web|url=http://www.varietyasiaonline.com/content/view/1328/|title=The Case Review| author = Elley, Derek | publisher = "Variety" | date = 2007-05-15 | accessdate =2008-03-27] Other critics, meanwhile, have noted that while the film is an "accomplished and well executed piece of cinema," the ending nevertheless can be "divisive" or at least difficult to swallow. [cite web|url=http://chinafilmjournal.com/2008/03/19/review-the-case-%E7%AE%B1%E5%AD%90/|publisher = China Film Journal|title =Review: The Case | date =2007-03-19|accessdate =2008-03-28] A more technical review from praised the film director's methods as "something special" in the way they reinforce "an evident theatrical treatment of the subject matter." [cite web|url=http://www.fipresci.org/festivals/archive/2007/hong_kong/case_gmak.htm |title= "The Case": A Suitcase As Magical Object|author = Mak, Grace |publisher = FIPRESCI | date =2007 | accessdate =2008-03-28]