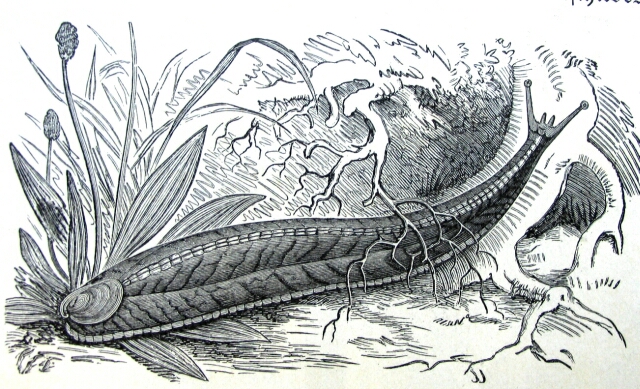 The shelled slug,"Testacella haliotidea", is a rarely seen, air-breathing, land , a terrestrial in the family , the shelled slugs.

This species is common along the western , along the European coast and throughout apart from northern . This slug occurs in but its distribution is under-recorded there.

It also occurs as an introduced species in southern , and (where it is called the earshell slug). The distribution data for the , (, ) and (, ) are incomplete.

This species is seen mostly in the spring, living in cultivated habitats or on disturbed ground. The slug lives mostly underground, but may sometimes be found under stones or in leaf litter.

This is a large, very agile, pale brown slug, with a length of 12 cm. It has a small ear-shaped, external shell, less than l cm long, at the tail end of the mantle.

The diet of these slugs consists mainly of s, which are usually attacked and eaten underground. However, in very wet conditions, when earthworms are found on the surface, the slugs may attack them there. The grip of the needlelike teeth of the of the slug is so strong that when the earthworm prey retreats to its burrow, the slug is also drawn below the surface, where it continues to eat the worm.

* [http://www.the-piedpiper.co.uk/th11a(1).htm Casual Intruders] , from which the initial information for this article was taken.