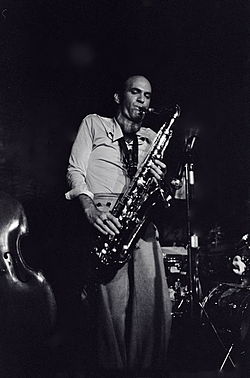 Dave Liebman (born on 4 September 1946, Brooklyn, New York) is an American saxophonist and flautist.[1] In June 2010, he received a NEA Jazz Masters lifetime achievement award from the National Endowment for the Arts.

David Liebman was born into a Jewish family in Brooklyn, New York, on September 4, 1946. He began classical piano lessons at the age of nine and saxophone by twelve. His interest in jazz was sparked by seeing John Coltrane perform live in New York City clubs such as Birdland, the Village Vanguard and the Half Note. Throughout high school and college, Liebman pursued his jazz interest by studying with Joe Allard, Lennie Tristano, and Charles Lloyd. Upon graduation from New York University (with a degree in American History), he began to seriously devote himself to the full-time pursuit of being a jazz artist.

In the early 1970s, after recording with Genya Ravan and Ten Wheel Drive, Liebman took the leading role (as President) in organizing several dozen musicians into a cooperative, Free Life Communication, which became an integral part of the fertile New York loft jazz scene in the early 1970s and was funded by The New York State Council of the Arts and the Space for Innovative Development. After one year spent with Ten Wheel Drive, one of the early jazz fusion groups, Liebman secured the saxophone/flute position with the group of John Coltrane's drummer, Elvin Jones. Within two years, Liebman reached the zenith of his apprenticeship period when Miles Davis hired him. These years, 1970–74, were filled with tours and recordings. At the same time, Liebman began exploring his own music, first in the Open Sky Trio with Bob Moses and then with pianist Richie Beirach in the group Lookout Farm. This group recorded for the German-based ECM label as well as A&M Records while touring the U.S., Canada, India, Japan and Europe. Lookout Farm was awarded the number one position in the category "Group Deserving of Wider Recognition"in the 1976 Down Beat's International Critics' Poll.

In 1977, Liebman did a world tour with pianist Chick Corea, followed up the next year by the formation of the David Liebman Quintet with John Scofield, Kenny Kirkland and Terumasa Hino as featured sidemen. After several world tours and recordings by the quintet over three years, he reunited with Richard Beirach. They began performing and recording as a duo, as well as creating the group Quest in 1981. Beginning with bassist George Mraz and drummer Al Foster, the group solidified when Ron McClure and Billy Hart joined in 1984. Through 1991, Quest recorded seven CDs, toured extensively and did many workshops with students worldwide.

Liebman's present group, formed in 1991, includes guitarist Vic Juris, bassist Tony Marino and drummer Marko Marcinko. With these musicians, he has pursued an eclectic direction in recording projects that has ranged from jazz standards to Puccini arias, original adaptations from the John Coltrane and Miles Davis repertoires, original compositions in styles ranging from world music to fusion, always maintaining a repertoire that balances the past, present and future.

Over the past decades, Liebman has often been featured with top European jazz artists such as Joachim Kühn, Daniel Humair, Paolo Fresu, Jon Christensen, Bobo Stenson and in the World View Trio with Austrian drummer Wolfgang Reisenger and French bassist Jean-Paul Celea. His ability to play in so many diverse styles has led to big band and radio orchestra performances with the Brussels Jazz Orchestra, the WDR and NDR in Germany, the Metropole Orchestra of the Netherlands, the new music group Klangforum from Vienna and, most notably, Liebman was the first improviser to perform with the world famous Ensemble InterContemporain founded by Pierre Boulez in France. On all these occasions, the music is arranged from Liebman's own compositions and improvisations. He has consistently placed among the top finalists in the Down Beat Critics' Poll since 1973 in the Soprano Saxophone category. David Liebman has been featured on several hundred recordings of which he has been the leader or co-leader on over one hundred. Nearly three hundred original compositions have been recorded. His artistic output has ranged from straight-ahead classic jazz to chamber music, from fusion to avant garde, with numerous CDs featuring original arrangements of the music of Monk, Miles Davis, Coltrane, Kurt Weill, Alec Wilder, Cole Porter, Jobim and Puccini.

Liebman has published material on a variety of subjects including instructional DVDs. He has also published chamber music and over the years has contributed regularly to various periodicals, such as the Saxophone Journal and the International Association of Jazz Educators Journal. He is the author of several milestone books: Self Portrait of a Jazz Artist, A Chromatic Approach to Jazz Harmony and Melody, Developing a Personal Saxophone Sound and numerous others, several of which have been translated into other languages.

His teaching activities at universities and in clinic settings have taken him literally around the world as a result of his varied musical directions and expertise on several instruments, along with an ability to articulate the intricacies of the jazz language, aesthetic and technique. Over the years, he has regularly received grantees to study with him funded by the NEA (U.S.), the Canadian Arts Council, as well as Arts Councils of numerous European countries. In 1989, he founded the International Association of Schools of Jazz (IASJ), an organization dedicated to networking educators and students from international jazz schools through periodic meetings, exchange programs and newsletters. Liebman presently serves as the Artistic Director of the IASJ. He scored music for the JazzEx Ballet Company in the Netherlands in the early 1990s and Ocean of Light for Katrina and the Tsunami tragedies in 2006.

Liebman has received several distinguished awards including two NEA grants for composition and performance; an Honorary Doctorate from the Sibelius Academy of Helsinki, Finland; a Grammy nomination for Best Solo Performance in 1998 and Best Arrangement for Big Band in 2005; induction into the International Association of Jazz Educator's Hall of Fame in 2000; Artist Grant from the Pennsylvania Council of the Arts in 2005; and Jazz Journalist Award for Soprano Sax in 2007. In June 2010, Liebman received a 2011 NEA Jazz Masters lifetime achievement award from the National Endowment for the Arts, including a stipend of $25,000.[2][3]

Selected as 2nd Best of the Year -Falter Weekly-Vienna, Austria