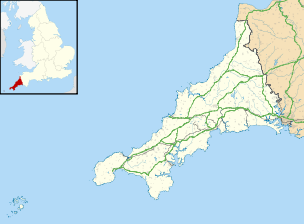 Location of the sinking of Maria Assumpta off Cornwall.

The Maria Asumpta was a brig that was wrecked in 1995 with the loss of three lives.

The Maria Asumpta was launched at Badalona in 1858, and was involved in the textile trade between Argentina and Spain; later she was used to transport slaves and salt. In the 1930s an engine was installed, and she was renamed Pepita. With the installation of the engine, her rigging was reduced, and in 1953 she was again renamed, this time Ciudad de Inca. By 1978, she was operating without masts in the Mediterranean. In 1980, her owners wanted to sell her engines and burn the ship. Mark Litchfield and Robin Cecil Wright, who had founded the China Clipper Society, bought the Ciudad de Inca for the value of her engines. Over the next 18 months, the ship was restored, and became a sail training ship in 1982. Between 1984 and 1988 she was based at Quebec and sailed on the Great Lakes. In 1988 she was renamed Maria Asumpta, and ceased to be registered as a sail training ship. Her status now was a private yacht. She was by then the oldest surviving sailing ship. Maria Asumpta later regained her sail training ship status. In 1994, she took part in a tall ships event at Rouen, France.

The Maria Asumpta was on her first voyage after a refit at Gloucester. The first part of the voyage was hit by bad weather and she had sheltered at Porlock, Lynmouth and Swansea Marina. On the afternoon of the 30 May 1995 she was preparing to enter Padstow harbour. The captain, Mark Litchfield, decided to take her between The Mouls and Pentire Point, which was not a route recommended by the Admiralty.[1] Litchfield later stated that the reason for sailing fairly close to shore was to enjoy the view and to benefit from the strong tidal race.

The engines suddenly stopped; two men were sent to attend to the engine whilst the rest of the crew of fourteen raised more sail. Although lookouts had been posted at the bow, they failed to spot submerged rocks and about five minutes after the engines stopped, the Maria Asumpta struck rocks at Rump Point 50°35′40″N 4°55′28″W﻿ / ﻿50.594556°N 4.924389°W﻿ / 50.594556; -4.924389 and began to founder. An immediate mayday was issued. The crew abandoned ship, and many of them jumped onto the rocks, but three crew were drowned. The tragedy was witnessed by many sightseers, who had come to watch the Maria Asumpta's arrival.[1]

The Marine Accident Investigation Branch carried out an enquiry into the loss of the Maria Asumpta, and the subsequent report was used in evidence by Mark Litchfield at his trial.[2]

Litchfield was charged with the manslaughter of the three crew members who died, due to his gross negligence in navigating too close to the shore, knowing that the diesel was contaminated. He pleaded "not guilty".[1]

During the trial, evidence was given that Litchfield put the ship into a dangerous situation by coming too close to the shore in a lee wind - i.e. the wind was blowing onshore. When the engines stopped, the ship was effectively doomed and had she been further out to sea would have been able to avoid the rocks. He had been advised by the Padstow harbourmaster to stay further out to sea, and had previously been advised at Gloucester that the fuel was contaminated. It also emerged during the trial that Litchfield had previously been the master of the Marques, which had sank in 1984 with the loss of 19 lives.[1]

At the conclusion of the trial, the jury returned a majority verdict of "guilty" and Litchfield was jailed for eighteen months by Mr Justice Butterfield.[1] The case is used in teaching gross negligence in law.[3][4]

Litchfield appealed against his conviction, but his appeal was disallowed.[5]

A memorial to the three crew who died in the wreck of Maria Asumpta was erected in St Enodoc's Church, Trebetherick.[6]