Twin Towers II is a design by engineering graduate Kenneth Gardner and architect Herbert Belton (deceased). Twin Towers II is a possible alternative site plan for rebuilding 's site destroyed in the . In February 2003, was officially chosen by the as the site plan to rebuild the former World Trade Center site.Fact|date=June 2007

=Summary= This plan highlights two street-level footprint memorials with replicated of the original Twin Towers, re-engineered 115 floor twin towers resembling the originals in form but with technologically improved structural features including state-of-the-art safety design.Fact|date=June 2007 Other features to the plan are a 9/11 museum, a center for education and the arts, a luxury residence hotel and retail space designed to complement the downtown neighborhood community.Fact|date=June 2007 This plan is designed with less office space than the official site plan, Memory Foundations.Fact|date=June 2007 Plans also include restoring the original WTC Plaza. Adding sky bridges in between the towers is also being considered. If built, they will surpass the , and

The overall plan for new Twin Towers has consistently been preferred in various public opinion polls from 2002 to the present (typical poll).Fact|date=June 2007 A major driver of early public sentiment favoring the plan was opposition to the original design of the , which as a single tower replacing two, and with fewer inhabitable floors than the originals (topped by a skeletal and antenna technically allowing the tower to claim a greater height than its predecessors), was seen by some as a symbolic chastening, humbling, or surrender to fear in the face of terrorism.Fact|date=June 2007 Other Twin Towers II supporters are driven by a desire to rebuild what they see as an iconic symbol of New York and America in recognizable form; this thought facilitates the process of resilient healing while demonstrating the futility of the attacks as terrorist acts.Fact|date=June 2007 After extended controversy, the original Freedom Tower plan with the latticework and unusual twisted shape was dropped in favor of a more conventional design that is reminiscent of the original North Tower. Twin Towers II's most prominent endorsement came from New York real estate developer , who formally announced his preference of the plan's design over the Freedom Tower's design at a press conference in Trump Tower on . Other advocates of the Twin Towers II plan included , David Shuster (), Deroy Murdock (""), Nicole Gelinas ("") , John Avalon ("") as well as several grass roots organizations primarily established to support the growing effort to rebuild the Twin Towers. [citeweb|title=What Are We Afraid Of?|url=http://www.nationalreview.com/murdock/murdock200503111045.asp|author=Deroy Murdock|publisher=""|accessdate=2008-09-27] Designs for rebuilding the Twin Towers or any skyscraper/s above 80 stories were categorically rejected from the official design competition by government officials and agencies charged with the responsibility of redesigning and rebuilding the former World Trade Center site after the events of The .Fact|date=June 2007 Other opinion felt that rebuilding the towers was too much of a traumatic reminder of the events of 9/11 while others, including critics of architecture, heard the call to update the site with 21st century building design.Fact|date=June 2007 Others still saw rebuilding the Twin Towers as an impractical imposition of concentrated office space for the community around the lower Manhattan site; a community and neighborhood severely affected by the 9/11 terrorist attack.Fact|date=June 2007 Others have also believed that if the World Trade Center was rebuilt, it would also be possible that the events of 9/11 will happen again considering that the towers have been endangered in the past.Fact|date=June 2007 However, with the construction for the Freedom Tower being delayed and how low support is dropping, there is a possibility that the Twin Towers II may have to be built, but it will be confirmed soon what will officially happen.With a new delay of the Freedom tower the towers may be built.

The plan is approved and the Final site Plans are completed. Devolpers are Just waiting for the final status of the FT if it is going be built or cancelled.The Port Authority has approved of this plan.This plan will be built faster then the FT and will be better to the Economy then the Freedom tower. Also this plan will be cheaper and is more popular by New Yorkers and the Port Authority.

The site plan cosists of 3 parts. The first part which is the main superblock contain the towers and memorial. The North Tower memorial contains a part of the original facade surrounding the Koeing Sphere and a ring of flags. The South Tower memorial is similar and consist of a reconstructed facade surounding a fountain and a ring of flags. In the center of the superblock is the Garden of Inspiration. In the memorial plaza is the Memorial Hotel (WTC6).On the other side of the superblock, inbetween Towers 1 and 2 is Wtc 3. Inbetween the superblock and Wtc 4 and Wtc 5 is Fulton Street which is restored. Between Wtc 4 and Wtc 5 is the restored Greenwich Street. It is unknow if the Deuch Bank Building Site will be used to build a Wtc 8. 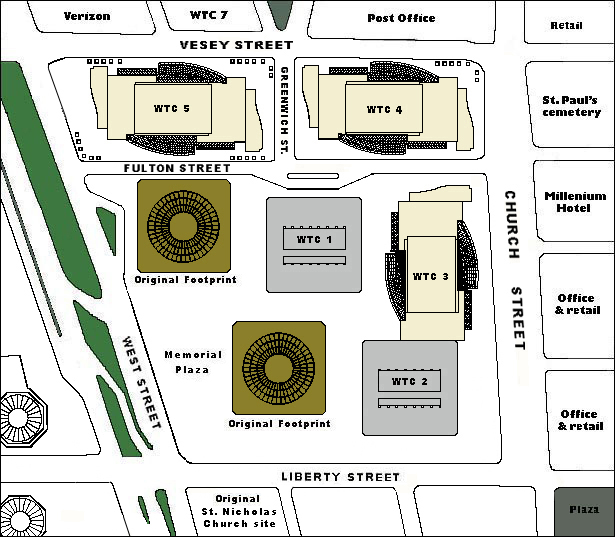 The foundation building the memorial made public on , a list of the largest donors, including: