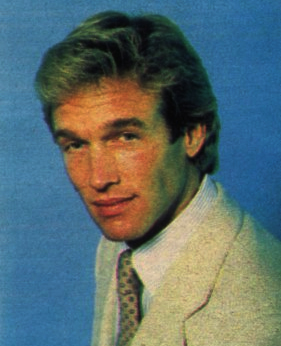 Peter Flint was a on the American "Santa Barbara". He was portrayed by American from to . Meadows returned in a cameo on .

Peter Flint, a man with a hidden past, thought he had it all figured out. He was to marry Kelly Capwell, a daughter of a wealthy businessman C.C. Capwell and nothing would ever come in his way. Or so he thought. In the very first episode, with the release of Joe Perkins from prison, the first formed triangle on the show announced itself. [ [http://www.youtube.com/watch?v=GPMXR6AtFF8 Peter and Kelly beginning] ] Peter, who had also been involved in the storyline that preceded the show (Channing Capwell Jr.'s murder), was convinced that Joe had murdered Channing, but it was later revealed that Peter was a lot more involved in the story than the viewers were led to believe. [ [http://www.youtube.com/watch?v=q9tBexsJXPY Peter Channing blackmail] ]

Noticing the attraction between Kelly and Joe, Peter often tried to break up the duo, but their love was too strong for Peter to break. Peter set out a perfect scheme to accuse Joe of drug trafficking, and at one point Joe was presumed dead when he got lost in the ocean. [ [http://www.youtube.com/watch?v=Rmpe8p8Y1Ys Joe is alive] ] Peter then managed to pursue Kelly to marry him again, only to get disappointed once again when Joe returned.

Peter's shady past announced itself when Ginger Jones came to town and started blackmailing Peter, who was an ex-gigolo. Peter jumped to Kelly's rescue when Ginger kidnapped her. When that part was solved, Peter concentrated on convincing Kelly to marry him, and to achieve that, he had to remove Joe. He arranged a meeting with him in the woods and tried to kill him, but ended up shot, making a clear path for a Kelly-Joe reunion. [ [http://www.youtube.com/watch?v=U6sTfSiHGsw Peter and Joe shoot] ] Realizing that he needed to change his strategy, Peter told Kelly that he believed that Joe wasn't responsible for the murder of Channing, and he accused Mason Capwell of it, but later nixed the idea.

After being released from the hospital, Peter's health took a turn for the worse. He was no longer able to think rationally. He seduced a waitress named Barbara Anderson, believing that she was Kelly. He raped her and then murdered her, leaving a white carnation at the scene of the crime. He then murdered Veronica Gayley [ [http://www.youtube.com/watch?v=leeg4njCM38 Peter kills Veronica] ] (Mason's secretary), and Summer Blake [ [http://www.youtube.com/watch?v=cLTQfgggG6k Peter kidnaps Summer] ] (Gina DeMott's sister). He tried to kill Kelly but her sister Eden interfered and he tried finish her off too, but Eden found a way to escape.

Peter's final plan consisted of kidnapping Kelly after wedding with Joe. [ [http://www.youtube.com/watch?v=vouHtOJsNpo Peter kidnaps Kelly] ] He managed to do that, and after a long struggle Kelly was, once again, rescued. Peter had completely lost his mind at the time and he even wrote a letter of confession for all the murders he committed. He then took Joe hostage, shot him and Joe fell out of the window, and it eventually caused Joe to die. Peter tried to kill Kelly, but Cruz Castillo managed to shoot Peter down before he could get to Kelly.