What Ever Happened to Baby Jane? (film)

What Ever Happened to Baby Jane? (film)

Infobox_Film
name = What Ever Happened to Baby Jane? 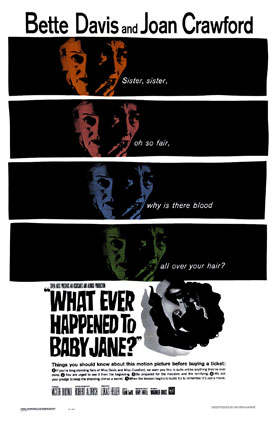 caption = Original poster
writer =
Based on the novel by
starring =

"What Ever Happened to Baby Jane?" is a 1962 American produced and directed by . The screenplay by is based on the novel of the same name by . In 2003, the character of Baby Jane Hudson was ranked #44 on the 's list of the "50 Best Villains of American Cinema".

In a lengthy prologue, we are introduced to six-year-old Baby Jane Hudson, a highly successful performer, and her older sister Blanche, who remains in her shadow. As the two become adults, however, Jane fades into obscurity while Blanche becomes a renowned film actress. At the height of her career, Blanche is paralyzed in an automobile accident for which the Jane is held responsible.

As the years pass, the two become recluses in their decaying mansion, where Jane cares for Blanche. When she learns Blanche is planning to sell the house and perhaps place her in a home, Jane holds her prisoner and subjects her to sadistic verbal, emotional, and physical abuse. Becoming increasingly demented, she thwarts Blanche's efforts to contact the neighbor and kills their maid Elvira when she becomes aware of the situation.

Jane decides to stage a comeback and hires shiftless pianist Edwin Flagg to accompany her. Although he immediately realizes she has no talent, he goes along with her plan in order to earn his fee. When he discovers Blanche gagged and bound in her bedroom and flees from the house, Jane fears he may call the police and drives Blanche to a nearby beach. While lying in the blazing sun, the slowly dying Blanche confesses she had been trying to run over Jane with the car and was in fact responsible for her own paralysis. As a crowd gathers and the police arrive, the now completely deranged Jane begins to entertain them with the song-and-dance routine that made her a childhood star.

The pairing of and was, by most accounts, suggested by Crawford, who had worked with Robert Aldrich on "Autumn Leaves" in 1956 and claimed she had always wanted to work with Davis. The tension between Blanche and Jane onscreen was equaled by the rivalry between the two stars offscreen. The women reportedly bickered over salaries and who would receive top billing. A great deal of friction was apparently also generated mid-production by their very different acting styles - Davis played Baby Jane to the excessive, hysterical hilt, while Crawford tended to cower and remain passive and understated. [ [http://www.tcm.com/tcmdb/title.jsp?stid=95445&category=Articles "What Ever Happened to Baby Jane?" at Turner Classic Movies] ]

The house used for the exterior of the Hudson mansion was located at 172 South McCadden Place in the section of . The final scene on the beach was shot in .

The small role of the neighbor's daughter was played by Davis' daughter B.D. Merrill who, following in the footsteps of Crawford's daughter Christina, later wrote a that depicted her mother in a very unfavorable light.

Crawford was infuriated when Davis was nominated for an Oscar and she was overlooked. She contacted the Best Actress nominees who were unable to attend the ceremonies and offered to accept the award on their behalf should they win. When was declared the winner for "The Miracle Worker", Crawford triumphantly pushed her way past Davis and swept onstage to pick up the trophy. Davis later commented, "It would have meant a million more dollars to our film if I had won. Joan was thrilled I hadn't." ["Mother Goddam: The Story of the Career of Bette Davis" by Whitney Stine, with a running commentary by Bette Davis, Hawthorn Books, Inc., 1974, ISBN 0-8015-5184-6, pp. 296-297] .

The film's success led to other projects featuring psychotic women, directed and/or produced by Aldrich, including "" and "".

The film was remade as a 1991 starring real-life sisters Vanessa and .

In his review in the "", observed, " [Davis and Crawford] do get off some amusing and eventually blood-chilling displays of screaming sororal hatred and general monstrousness ... The feeble attempts that Mr. Aldrich has made to suggest the irony of two once idolized and wealthy females living in such depravity, and the of their deep-seated envy having brought them to this, wash out very quickly under the flood of sheer grotesquerie." [ [http://movies.nytimes.com/movie/54018/What-Ever-Happened-to-Baby-Jane-/overview "New York Times" review] ]

"Variety" stated, "Although the results heavily favor Davis (and she earns the credit), it should be recognized that the plot, of necessity, allows her to run unfettered through all the stages of oncoming insanity ... Crawford gives a quiet, remarkably fine interpretation of the crippled Blanche, held in emotionally by the nature and temperament of the role." [ [http://www.variety.com/review/VE1117796282.html?categoryid=31&cs=1&query=what+ever+happened+to+baby+jane "Variety" review] ]

"" awarded the film four stars, calling it "Star wars, trenchantly served" and adding, "If it sometimes looks like a poisonous senior citizen show with over-the-top spoiled ham, just try to look away ... As in the best Hitchcock movies, suspense, rather than actual mayhem, drives the film." [ [http://movies.tvguide.com/happened-baby-jane/review/122673 "TV Guide" review] ]