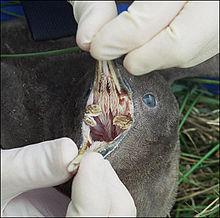 Diphtheritic stomatitis is a recently discovered disease and has thus far been reported only in Yellow-eyed penguins (Megadyptes antipodes). Its symptoms are similar to human diphtheria and is characterized by infecteous lesions in the mouth area that impede swallowing and cause respiratory troubles. The infection is caused by Corynebacterium amycolatum, an aerobic Gram-positive bacterium and mainly affects very young chicks. However, it seems likely that a triggering agent (e.g. a virus) might be involved in which renders the corynebacterium a secondary pathogen.

The disease has been a serious cause of mortality in the 2002 and 2004 Yellow-eyed penguin breeding seasons. It seems that only the New Zealand South Island and Stewart Island/Rakiura were affected.

During the latest outbreak of the disease (2004), several treatment methods were tested. Main treatment involved the administration of antibiotics, in some cases glucose solution or dietary mixtures were additionally supplemented. Outcome of the different treatment methods varied greatly. Especially the success of antibiotic treatment and a widespread use on wild animals remains a matter of debate.