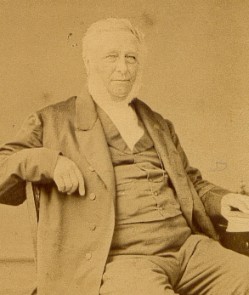 William Thomas Buckland was born on 5 September 1798 in now in , , in the house on Longbridge Farm where he later lived, and where he died on 1 November 1870. He became an innovative surveyor and auctioneer,

While he was at school in , in 1812, his father died, leaving six children, of whom he was the youngest. He left school in July of the following year. His apprenticeship, near , was a 'hard bondage', of which he spoke often in remembrance of its bitterness. In 1820 he became a of the , and commenced business on Holborn bridge.

In 1828 he founded the firm "Buckland Surveyors and Auctioneers", later "Messrs Buckland and Sons" at . The firm expanded to include branches in , and , and survived for over 150 years. His work originally included dealing with compensation claims for lands taken for the construction of Railways, under Private Acts of Parliament then in operation, and he was also responsible for the preparation of Tithe Award Maps, some of which can still be seen in the [http://www.buckscc.gov.uk/bcc/content/index.jsp?contentid=-746638797 Centre for Buckinghamshire Studies] in and other local libraries.

In September 1850, W T Buckland and his son Thomas began conducting sales of in a field belonging to te "North Star Inn" near the Great Western Road Railway Station in . They began by holding sales on the first Tuesday of every month. This soon increased to every other Tuesday then finally every Tuesday. The market continued to be run by "Buckland and Sons" until it finally closed in December 1988.

One of the annual highlights for the firm was the Christmas sale of stock from the Royal Windsor Estates.

Despite their long association with the Royal Estates, it was more than 40 years after their founder's death, that George V granted his to "Messrs Buckland & Sons" in November 1911.

In 1862, G.W.J. Gyll wrote a description of William Thomas Buckland, describing him as: