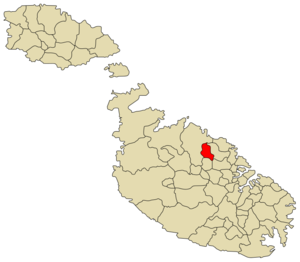 Għargħur is one of the smallest and oldest towns of .

Għargħur is situated on a hilltop between two valleys in the North-East of Malta with a population of 2,389 (Nov 2005). Its is a red star over a red triangle on a silver shield with the motto '' which means 'The Highest'. This motto indicates the fact that this town is geographically one of the highest in Malta.

Some Roman artefacts, found during road construction, were carried to the Domus Romana (Roman Villa), a Roman Villa and Museum, situated in the old town of Rabat. There is documented reference of Għargħur as far back as , in the lists of the Dejma, which was a Militia that guarded the locals from pirate attacks. This settlement suffered from severe de-population during the and some years later due to continuous pirate attacks.

Għargħur was a rural community living in an area particularly lacking fertile soil and fresh water. Nevertheless, the inhabitants of this area were able to finance the building of a parish church and several other chapels which host Baroque fine arts. The main attraction of the village, besides the countryside, is the parish church dedicated to Saint Bartholomew the Apostle. Its interior is of the but it has a fine façade. The original façade was demolished and the one seen today was built in 1743. The church was built between and and was designed by Maltese architect Tumas Dingli.

Its treasures include a wooden statue of Saint Bartholomew sculptured in , attributed to Maltese artist Melchiore Gafa. The statue was made circa 1666 and it is believed to be the model for the similar statue in . It was brought to the town in . Restorations on it were held in . In the statue had further preservations and its niche was restructured. The statue is the second heaviest in the .

The Victoria Lines, named after Queen Victoria, and which divide the island of Malta from east to west, passes through this locality. Other fortifications can also be found. Għargħur hosts much of Malta's telecommunication infrastructure.

Prior to the installation of , a concave wall was constructed in Għargħur to detect incoming Italian planes during . This building is called "il-Widna" by locals (lit. the ear). Għargħur hosted a number a refugees from the harbour area during that war. These refugees were seeking shelter from the continuous air raids by the . The public school was used as a dormitory for these refugees.

The main event of the year is the village festa which is celebrated on the 24th (if this turns out to be a Sunday) or the last Sunday of August. The statue of the saint is carried shoulder high along the illuminated streets of the village accompanied by musical bands. A display of colourful fireworks, ends the village festival. Many tourists tend to take part in the celebration of the saint's day, by visiting the church and the well-known fireworks display.

In modern times a controversy has risen over the real name of this village - whether it should be called Gargur or Ħal-Għargħur. The original name was Ħal-Għargħur (pronounced hal- arur). 'Ħal' is an old abbreviation of 'Raħal', which mean a "village/small town". 'Ghargħur' most probably derives from 'Gregorio' — in the middle of the 15th century, the village was called Casal Gregorio. The current pronunciation is possibly related to the influence of English rule (-). [ [http://www.it-torca.com/news2.asp?artid=1397 It-Tora ] at www.it-torca.com] . It is also possible that the name Gregorio emerged as a result of the process of Italianisation which the Maltese language underwent. Similar example are the names of the town of , which on official documents appeared as Zurico and , which on various documents and maps was referred to as Nascario. Most probably, the name Għargħur derives from the Għargħar, Malta's national tree. It is interesting to note that in the North-Eastern part of Malta there are other place names which possibly have their origin to this particular tree. These are San Ġwann ta' l-Għargħar and Il-Ħotba ta' l-Għargħar.