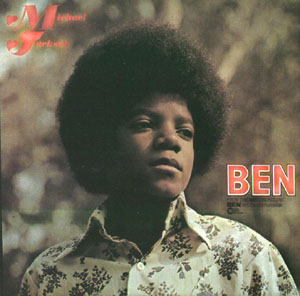 "Ben" is a number-one hit song recorded by the teenaged for the Motown label in 1972. The song, the theme of a 1972 film of the same name (the sequel to the 1971 killer movie "Willard"), spent one week at the top of the U.S. pop chart. It also reached number-one on the Australian pop chart, spending eight weeks at the top spot. The song also later reached a peak of number seven on the British pop chart.

The song became the first of thirteen number-one pop hits for Jackson in the and his first number-one as a solo artist.

Later included on Jackson's album of the same name, "Ben" won a Golden Globe for Best Song and was nominated for an for Best Original Song.

* The song was originally written for , but he was on tour and unavailable when it was time to record the single, so the song was offered to Michael Jackson.
* Though Jackson had already become the youngest artist to ever record a number-one ("" with his brothers, , in 1970), "Ben" made him the third-youngest solo artist, at fourteen, to score a number-one hit single. Only , who was thirteen when "Fingertips, Pt. 2" went to number one, and , who was months shy of his fourteenth birthday when "" hit number one in 1971 were younger.
* Jackson performed "Ben" in front of a live audience at the s ceremony, where it was up for the Oscar for Best Original Song in 1973.
* Kipp Lennon, who performed the singing part of Michael Jackson's character on "" , sang "Ben" to in the episode "".
* The band makes a reference to the song "Ben" on their album "Vs." on the song "Rats", with the line "Ben, the two of us need look no more" repeated several times at the end the track.
* It has also been covered by the Irish group on their album "".
* The song was featured in the TV movie "", sung by ' character at the wedding of his brother, Ben, and backed by a gay men's chorus.
* British singer covered the song for her album, "Over The Rainbow"
* The song was covered in 2003 by , for the remake of the prequel to the film "Ben", "Willard". The for the song is included on the DVD.
* Another cover of "Ben" was featured on the 2nd single of an up-and-coming Japanese singer, Stephanie, entitled "because of you".
* The song was spoofed in the television show "" when it was sung by about his rat named "Rufus".
*The song was sang by 9 year old autistic boy David Militello on the third season of "".
* In a second season episode of the North American version of "Queer as Folk", sings the opening lines to this song at a bar on karaoke night to his love interest, .
* In , released a cover version of the song, which reached #5 in the UK charts, as a tribute to the late , a young liver transplant patient.
* The Song was covered in 1990 from Silvy Melody at the Vlaamse showbizz TV Show De Kinderacademie.