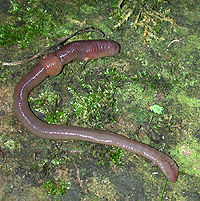 The clitellum is a thickened glandular section of the body wall in earthworms and leeches, that secretes a viscid sac in which the eggs are deposited. It is present about 2 centimetres (0.79 in) behind the anterior end of the body (around 14th, 15th and 16th segments).

A clitellum is part of the reproductive system of clitellates, a subgroup of annelids which contains oligochaetes (earthworms) and hirudineans (leeches). The clitellum is a thick, saddle-like, ring found in the epidermis (skin) of the worm, usually with a light colored pigment. To form a cocoon for its eggs, the clitellum secretes a viscous fluid. This organ is used in sexual reproduction of some annelids. The clitellum becomes apparent in mature annelids but may be hard to locate visually in younger annelids. In leeches, it appears seasonally. Its color is usually slightly lighter than that of the body of the annelid. Occasionally, living segments of the worm will be shed with the clitellum.