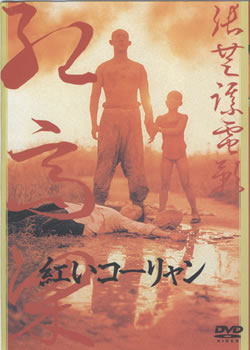 "Red Sorghum" (zh-stp|s=|t=|p=Hóng Gāoliáng) is a 1987 Chinese film about a young woman's life working on a for sorghum liquor. It is based on a novel by .

The film marked the directorial debut of internationally acclaimed filmmaker , and the acting debut of film star . With its lush and lusty portrayal of peasant life, it immediately spearheaded Zhang to the forefront of the Fifth Generation directors.

The film takes place in a rural village in China's eastern province of in the 1930s. It is narrated from the point of view of the protagonist’s grandson, who reminisces about his grandmother, Jiu'er. She was a poor girl who was sent by her parents into a pre-arranged marriage with an older man. This man, who owned a distillery, suffered from .

The girl places a pair of scissors in her blouse before traveling by sedan chair to meet her husband, supposedly to protect her from any of the leper's advances. As her wedding party, consisting of workers from the distillery and one hired sedan carrier, crosses a field of sorghum, it is attacked by a bandit with a pistol.

One member of her party, the hired member, fights off the assailant, who turns out to have a fake pistol, and a series of subtly flirtatious looks are exchanged. After she reaches the winery, the man disappears. He returns to the screen while Jiu'er is returning from her parents' house. We see him wearing the same mask as the man who attacked them the day before. He kidnaps Jiu'er and after a short chase, reveals his identity. He then clears some sorghum and they make love.

After the leper was mysteriously murdered, the young widow takes over the , which has fallen on hard times. She inspires the workers to take new pride in their wine, and once again meets the man who saved her life and then deflowered her. He arrives drunk and tries to claim her, telling the distillery workers how he deflowered her and that he is going to sleep in her room, but she tosses him out and he makes a fool of himself in his drunken rudeness. He sleeps in a liquor vat for three days, while the bandits kidnapped Jiu'er and asked for ransom, which the distillery workers paid. The bandits did not rape her because she told them she had slept with her deceased husband, the leper.

Later, the man who deflowered her comes back again, when they make the first batch of liquor. He takes three vats of the liquor and urinates in them, to the shock and sadness of the employees. He tells them (and the widow in particular) to "wait and see." He then carries her off and it is implied he again makes love with her. He meant it to anger Jiu'er, but somehow his urine makes the liquor taste better than ever before. The longtime distiller, Luohan, leaves in disgust, presumably because of her affair with the hired bearer and the resultant son, the narrator's father.

The style of the film shifts from fable to realism when World War II begins and Japanese troops invade the area. The Japanese soldiers order forced laborers to flatten the sorghum fields. The widow Jiu'er and the winery workers are among the forced laborers. They then order a butcher to skin the bandit alive. The butcher resists, but is given a choice of death or skinning, as a reminder to the laborers not to resist. The butcher is near to doing it, and attempts to attack a Japanese soldier. He is machine gunned, and the butcher assistant is given the task, to skin Luohan, the distillery worker, lest he himself be skinned. He does the skinning, and loses his mind. The narrator then identifies many atrocities of the Japanese during the war and notes Luohan as a member of the resistance.

They then have a liquor tasting ritual where they celebrate Luohan and his liquor, where Jiu'er recommends the distillery workers avenge his death. All of the distillery workers toast with the liquor, as does Jiu'er's son, the narrator's father, with the same song that Luohan sung at other rituals. In the early dawn, they set an ambush and take liquor with them to use as a fire bomb, which is urinated in by Jiu'er's son. Later, the boy runs back to the distillery and tells his mother the men are hungry. She arrives in time to be machine-gunned by the Japanese. The ambush is a noble disaster, with cannons misfiring and killing some of the ambushers but their homemade liquor destroy the Japanese trucks and troops, as well as most of the distillers. In the end, there is nothing but scenes of death, with the narrator's grandfather and father observing a red symbolic of the death and destruction and the red color of the liquor. The narrator's father is left chanting a prayer for his mother to rise to heaven at the close of the film.

The cinematography by makes use of rich, intense colors. Zhang himself was a cinematographer prior to his directorial debut, and worked closely with Gu.