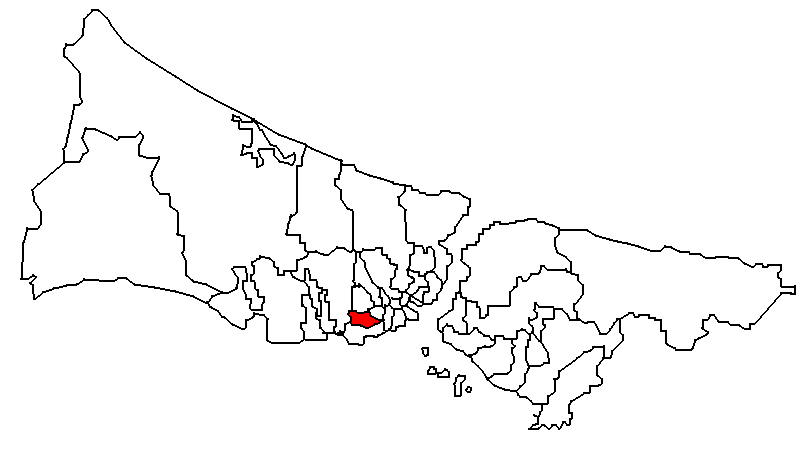 :"This article is about a district of Istanbul. See also "

Bahçelievler (meaning 'houses with gardens' in Turkish) is a large residential of , , on the an side of the city. It is accessible from the E-5 Highway that runs from the Istanbul airport to the Asian side of the city, covers 5% of Istanbul's land area and is home to over 470,000 people. Bahçelievler is the northern neighbour of , with a similar area.

Stone quarried in Bahçelievler was employed to build the old city of Constantinople. Prior to the Ottoman conquest of Constantinople, the area was largely farmland occupied predominately by ethnic Greeks. After the foundation of the in the 1920s, Bahçelievler emerged from settlements built alongside roads stretching out from the center of the province towards Europe -first the Londra Asfalt, and the later E5, built in the 1960s. Factories were built alongside the roads, followed by dense housing and apartment buildings. The population of Bahçelievler grew from 8,500 in 1960 to 100,000 in 1975 and today nearly half a million people are packed into 16.7 km².

In the 1970s part of the area was built to plan, and -until the 1980s- Bahçelievler was indeed full of houses with gardens, as its name suggests. During the rapid economic growth of Turkey in the 80's and 90's most of these houses were pulled down, sold to developers and replaced with apartment blocks- with far less green space between them; today the name Bahçelievler only accurately describes the central Bahçelievler District.

Some districts of Bahçelievler -such as Bahçelievler, Basın Sitesi and Yayla- are well lit, with tree lined avenues of attractive buildings and small parks, big shopping centers, cinemas and many small cafés. Traffic in these districts is congested, despite efforts undertaken in 2006 to relieve pressure with new roads, bridges and underpasses.

Outlaying districts such as or are comprised largely of factories, retail and small businesses (including many textile wholesalers), intermixed with extremely dense housing (typically, 6-8 story apartment buildings packed together in long rows) and run through with arterial roads. The infrastructure is poor, and the narrow streets are often choked with traffic.

There are branches of four universities, many public and private schools and hospitals. Prominent landmarks include the Unverdi shopping center (on the site of the old Unverdi cinema, in the center of the district), and the Omur Patisserie/Café on the E5 at the entrance to Bahçelievler. In 2006, a large Carrefour supermarket opened on the E5 at Merter.

Bahçelievler is accessible via bus, minibus, dolmuş or car, primarily from the E5 highway, and municipal train. Transit duration depends on the hour; typical times from the major hubs in Eminönü and Mecidiyeköy run from 45 minutes or more. Crossing to the European side is fastest by sea-bus from the adjacent municipality of Bakırköy, with connections to Kadıköy and Bostancı.