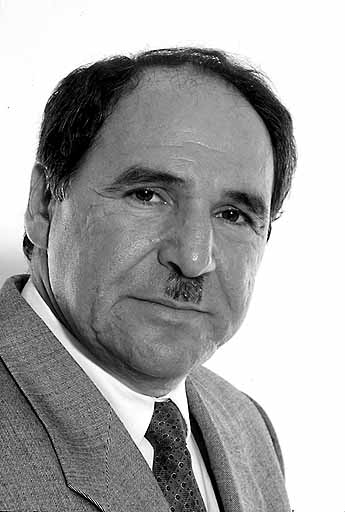 Abdalá Jaime Bucaram Ortiz (born , in ) is an ian and who briefly (less than six months, from to ) occupied the Presidency of . After months of showing ample and obvious symptoms, the determined his incompetence for the post, and in a radical and unprecedented decision, readily dismissed him as President. Thereafter he escaped to , where he still is a from justice.

Bucaram is the grandson of Lebanese immigrants. He grew up playing soccer in the streets of Guayaquil and later went on to become a successful athlete and earn a degree in physical education. He was also a sprinter in the 1972 Olympic team, the chief of Guayas and the president of , a soccer team from his hometown. Besides being a gym teacher, he earned a degree in law and soon began his political career. He used to live in Kennedy Norte, a neighborhood next to the former Simón Bolívar International Airport before he escaped to Panama. He was the nephew of the politician Asaad Bucaram Elmalin, who was mayor of Guayaquil. His sister, Martha Bucaram, was married to former President , both of whom were killed in an aviation accident.

He was the Mayor of Guayaquil, and the founder and member of the (PRE).

Candidate Abdala Bucaram Ortiz was elected as President of Ecuador. Although Bucaram defeated Social Cristiano Party candidate Jaime Nebot by a slim margin of approximately 20,000 votes, he managed to win all but one of the 21 provinces. The elections marked the end of a tight race in which Bucaram was frequently criticized for spending more time singing and dancing at campaign rallies than talking about issues. But in the end, Bucaram's rallying cry, "Primero los Pobres! (First the Poor)" turned out to be the decisive factor. In a country where over 65% of the population lives in poverty, and where every citizen by law must vote, it was clear that the candidate who successfully appealed to the poor would have the advantage.

During the campaign, Bucaram displayed an uncanny ability to talk to different people in different-even contradictory ways. Whether he was bare-chested in coastal cities promising a better tomorrow as he poured beer down his throat, wearing a stiff suit as he talked calmly to Quito businessmen, or pledging brotherhood as he danced with indigenous groups in El Oriente, Bucaram made many people feel as if he were one of them.

Abdalá Bucaram was President from , to , . His cabinet was put together by the Vice President Rosalia Arteaga. Within months Bucaram embezzled millions of dollars of public funds, causing him to be dismissed from the Ecuadorian presidency by the congress on grounds of alleged "incapacidad mental" (mental disability). Congress passed the measure with a simple majority instead of the two thirds required by the Constitution, and appointed congressional leader Fabián Alarcón in his place, bypassing the sitting Vice President Rosalía Arteaga.

This caused a constitutional crisis, during which both were simultaneously sworn Presidents. Finally, Congress requested that the army assert Alarcón's power.

*Abdalá Bucaram, self-proclaimed "loco", or madman, of Ecuadorean politics.
*On Ecuadorian TV interviews, Bucaram has said he likes cow stomach (guatita) soup, playing and playing .
*While officially visiting during his presidency, Bucaram showed up on TV eating with , both wearing -hair hoods.
*He held both the presidency of Ecuador and that of simultaneously. He planned to hire for the soccer team before its depravation.
* Releasing his own CD, "A Crazy Man Who Loves", ("el loco que ama") after winning the presidency.
* Inviting , the Ecuadorian woman who severed her husband's penis, to lunch at the national palace.
* Calling an ex-president "burro" (donkey) and later apologizing for having insulted donkeys.
* Shaving off his mustache on live television for raising money for the "".
* Serenading the winner of the World Banana Queen (Reina Mundial del Banano) Contest.

* [http://www.cidob.org/es/documentacion/biografias_lideres_politicos/america_del_sur/ecuador/abdala_bucaram_ortiz Extended biography (in Spanish) by CIDOB Foundation]
* [http://www.presidencia.gov.ec/modulos.asp?id=28/ Official Website of the Ecuadorian Government about the country President's History]