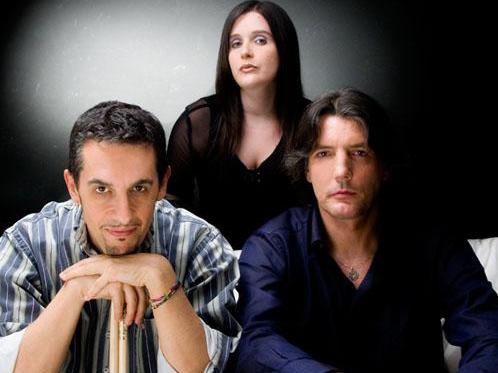 Sound Factory is a pop band from , .

In summer 2002, at a musical and event in Rome, Giovanni played for the first time with the singer/songwriter and composer Julie P. as an acoustic duo, piano and voice. After this, the pair decided to start working together joining their different musical backgrounds, thus giving birth to the Sound Factory project. Giovanni then, with Julie, started the work of production, creating new songs, and changing some of her old songs and taking care of the arrangements and composing the parts of all the instruments.

The work of the pair gave birth to the release of "Dreaming On", a CD including thirteen tracks and featuring the collaboration, as supervisor and more, of the drummer Roberto "Bob" Baruffaldi who, as well as than being part of the live line-up (together with Giacomo Anselmi (guitar), Fabio Penna (bass) and Valerio Passi (guitar)), also entered the project.

The band's album "Dreaming On" is in the album reviews section of 's [http://www.rollingstone.com/artists/soundfactory/albums/album/15410566/dreaming_on website] [ [http://www.rollingstone.com/artists/soundfactory/albums/album/15410566/dreaming_on Sound Factory's album Dreaming On @ RollingStone.com] ]

Julie P. is a composer, songwriter, singer, DJ (sampling, turntablism), sound and pro-tools engineer (she had her first home studio when she was seventeen) and record producer. She started composing music and playing at the age of thirteen. Early in her career she performed as a singer/rapper, going under the pseudonym of Lady Ice.In 1987, she teamed up with Ice One, a DJ, producing some bands and artists among the underground movement: [http://it.wikipedia.org/wiki/Colle_Der_Fomento Coller Der Fomento] "Odio Pieno" (Irma/), [ [http://www.repubblica.it/2003/j/sezioni/spettacoli_e_cultura/frankie/frankie/frankie.html Article about Frankie Hi NRG MC album] ] "La Morte Dei Miracoli" (BMG 1997), Ice One "B-Boy Maniaco" (1995 Irma/Virgin) [ [http://www.rapmaniacz.com/iceone.htm Julie P. mentioned in the review of the album "B-Boy Maniaco"] ] , Power MC's and produced a song,"Immobile" feat. Frankie Hi NRG MC for the talented Italian pop singer/songwriter [http://it.wikipedia.org/wiki/Niccol%C3%B2_Fabi Niccolò Fabi] . With her band 'Power M.C.s' she took part to a movie about incest called "Le amiche del cuore" directed by and played the role of herself on stage. In the early 90's Julie also took part in the "Gran Premio" TV show hosted by and several other TV shows. The artistical connection split up in 1997 and later Julie worked with producer Biagio Pagano, the head of Via Veneto Jazz, who at the time was involved also in pop productions. She produced tracks (also singing some of them) on Il Bagatto [ [http://www.musicboom.it/mostra_recensioni.php?Unico=20001108215016 JULIE P. mentioned in this review] ] "A Bag's Life" (2001 BAOL/SELF), rapper and author of a book. Always in the production team with Biagio Pagano she collaborated to the production of Flaminio Maphia "Per Un Pugno Di Euri" (2005 - Emi) singing in the intro song and producing the music and beats for the funny song "Da Terracina Cor Furgone" also singing there in a very special way. She also continued the collaboration with Il Bagatto giving her contribution merely as vocalist in his new album [ [http://top40-charts.com/song.php?sid=23786 IlBagatto Top 20 Italy - 10 position :: http://top40-charts.com ] ] "Il viaggio del pazzo vol.2" (2007 Universo). She also later collaborated with DJ Jurij with the song "See the Light". She also acted in the successful avant-garde version of the classic Ulysses named Hypertext Ulysses by and her verses have been an intro for several editions of the poetry festival in the Rome [ [http://www.romapoesia.it/97-02/ROMAPOESIA_CATALOGO.pdf JULIE P. @ ROMAPOESIA - poetry festival in Rome] ] RomaPoesia.

Giovanni Signoretti is a pianist, composer and arranger.He started his studies at the age of six with an important pianist and concert artist, Faliero Bonciani with whom he continued to study piano and solfeggio privately for five years.His great love for music pushed him to continue to study as an autodidact and led him to transcribe all that he considered of particular interest, starting from the most important rock bands as , , , , , , and until arriving, in the eighties, to the artists and bands musically involved in the jazz/fusion scene such as , , ,
, , /, , , , and , cultivating the incessant listening of many important artists as , , , and just to name a few and a good deal of classical music.As a composer he wrote and played in many theatrical performances, some of them corageously avant-garde conceived and performed by Ilaria Drago (poetess, actress and director). He also composed the music for some cartoons inspired by the novels of Alberto Moravia broadcasted by RaiSat.As pianist and keyboard player he played in several bands in the local music scene.

Roberto Bob Baruffaldi is a drummer both in live and studio sessions (with different TV appearances) for more than twenty years now with several contributions that also cover the jingles recordings area. He played with different artists and several prominent bands like the rock-trio and the fusion project. He played the drums on all tracks on the new album and gave a contribution in terms of musical arrangements and directions. The CD release will be followed by a tour and a play-along package for drummers.