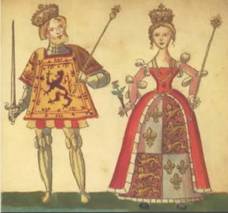 caption =James I and Joan Beaufort
reign = -
spouse = James I

On 2 February 1424 at , Joan married James I, shortly before he was formally crowned. They were feasted at that year by her uncle . She is said to have been the inspiration of James's famous long poem, "". They had eight children, including the future James II, and Margaret of Scotland, wife of . After James I was assassinated in 1437, she took over the regency for her son.