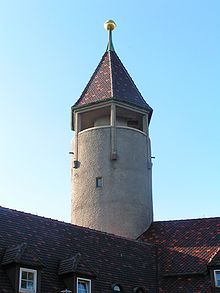 The tower of castle Teck

Teck was a ducal castle in the kingdom of Württemberg, immediately to the north of the Swabian Jura and south of the town of Kirchheim unter Teck (now in the district of Esslingen), taking its name from the ridge, 2544 feet high, which it crowned. It was destroyed in the German Peasants' War (1525). The castle was reconstructed during the 19th and 20th centuries.

In 1863, the title "Prince of Teck" (German: Fürst von Teck) was conferred as a courtesy title by King William I of Württemberg upon the children of his cousin Duke Alexander of Württemberg (1804–85) by his morganatic marriage with Claudine Rhédey von Kis-Rhéde (1812–41), ennobled as countess of Hohenstein. In 1871, Prince Francis, the eldest son of Duke Alexander, was created Duke of Teck. His eldest son Adolphus (born 1868) was the holder of the title in 1910.

The most famous of the Teck family is considered to be Duke Francis's daughter, Mary of Teck, Queen consort to George V of the United Kingdom and Empress of India.