"The First Eden: The Mediterranean World and Man" is a BBC documentary series written and presented by , first transmitted in the UK from .

It comprises four programmes, each of 55 minutes' duration, which describe man's relationship with the natural habitats of the Mediterranean, and is a glorious portrait of the landscape, wildlife and plants of the Mediterranean. From the earliest human settlements to the cities of today, from the forests of the North African shore and the Middle East to Southern Europe, this series tells the dramatic story of man and nature at work.

The series was produced by Andrew Neal, in association with the and WQED Pittsburgh. The music was composed and conducted by . ["The First Eden" DVD]

Episode 1. "The Making of the Garden"

The geologic processes that formed the Mediterranean ocean.

Deposition of salt precipitate through the evaporation of brine. Northward movement of Africa sealed the entrances to the Mediterranean in the East and the West 20? million years ago and caused the basin to dry out. Drilling cores from the bottom of the Atlantic Ocean show a 1 1/2 kilometre thick layer of salt under 100 meters of sediment. Five and a half million years ago the Atlantic Ocean broke through the Straits of Gibraltar.

Atlantic fish and other animals swam in to colonise the newborn sea.

Dwarf hippopotamus and elephants (now extinct) had no need for large size because of a lack of predators and because of limited vegetation.

5 1/2 million years ago there were forests on islands and all around the mainland shores of the sea. On the African shore (where it is very much hotter today) forests have died out except in the Atlas Mountains.

Migration routes established by end of ice age 2 1/2 million years ago. The Martin which weighs only a few ounces crosses the width of the Sahara. Oases are staging posts where birds may stay for several days buildingup strength.

European shore and springtime has arrived. Wildflowers, seasonal and perennial. Pollination by insects. Birds have travelled to feed on insects.Bee eaters nesting in sand banks in colonies.Spoonbills in Spain, stalks and flamingos.

High summer in the pine and olive woods with noisy Cicadas.

Crickets, grasshoppers and other insects hunted by spiders, scorpions and centipedes.

The island of Rhodes and Jersey Tiger moths.

Bison, Ibex. Wolf, the first animal to be tamed by man, hunting cooperation.

Around this time at the eastern end of the Mediterranean people were learning new ways of living.

Attenborough explores the shift over time from mans prehistoric view of the natural world as divine to a complacent view of it as a larder to be raided with impunity.

Cave paintings in Spain and France of wild animals as game 15,000 years ago show that wild Bulls were regarded with almost religious awe.

10,000 years ago Bulls were domesticated and mountain goats tamed. The domestication of wild pigs began.

9000 years ago in the grasslands of the Nile delta cattle owning tribes developed a much more elaborate way of life.Worship of a bull as the god . The was worshipped as the lord of the skies. Over time the worship of birds became generalised to all types of birds. The hippo was worshipped as (protector of pregnant women), the crocodile (the God of evil) the cat was mummified as an associate of the god of war (Pasht). There were , Ram, and gods. The images of them that stood in temples were given human bodies to show that they represented not ordinary animals but divine beings.

Fertilisation of fields by Nile floods. and cultivation.

was settled by people 9000 years ago. was the main form of wealth. It was used for cooking, lighting and anointed on the body for cleaning.Eight thousand years ago the domestication of wild vines began and were propagated from cuttings.There were over 100 palaces in Crete and they all centred around a large paved arena. Here was held the great ritual thatdominated the lives of the people, a blend of ritual devotion, athletic prowess and great bravery where men would somersault over a bull.

Fishing in the Mediterranean.

By the beginning of the first century AD the Romans had become the dominant nation in the Mediterranean; hunting was a Roman passion and they ransacked their vast empire for animals, the stranger the better. They were taken to the arenas that were the centres of mass entertainment. "The Roman public's thirst for blood and pleasure in witnessing pain seems to have been unquenchable and without limit." "The caged animals were kept in dungeons below the main arena. The terrified animals in their cages were hoisted up from this pit. And not only animals, human beings too, criminals, slaves and prisoners of war. And here in this arena they were set one upon the other to provide the crowd with spectacles of the most appalling carnage. It still continues to this day in Spain." coord">37.941084|27.342288

The cult of Artemis.During the first century BC a cult of bull worship appeared and soon spread across the Empire. Mithras a new God.The bull is still seen as the source of all life but now it requires a God in human form to release its fertility.

Roman Lepis Magna, Libya.By the end of the first century AD North Africa was supplying half a million tonnes of grain per year and two thirds of Rome's wheat. The southern shores of the Mediterranean were among the most fertile territories in the Roman Empire. -Desertification of land around the city.

In 43 AD St Paul settled in Ephesus, his message of Christianity began to strike at the trade in trinkets to pilgrims to the shrine of Artemis and a riot ensued, however erosion of the land and subsequent silting of the harbour at Ephesus stopped trade and caused the city to become abandoned. "See ".

The bull, one of the most important of the gods was dethroned, so today castrated and subdued it works out its days in harness as man's patient slave.

But at the other end of the Mediterranean the sun was just a little less harsh, the rainfall more generous, so there nature is able to a little better withstand man's assaults and so over the next few centuries the centres of human power and population slowly move to the other end of the sea.

Episode 3. "The Wastes of War"

Medieval attitudes and beliefs about animals credited some with extraordinary powers.

The spread of the black rat and plague.

Forests of Spain and Italy cut down for Merino sheep grazing.

The battle of the Lepanto.

End of 15th century shipbuilding moved to Spain for timber.

Episode 4. "Strangers in the Garden"

Invasive marine animal and plant species move from Red Sea to Mediterranean over 100species and growing.

Increasingly big and expensive boats throw away 70% of their catch.

Pollution of water by oil and untreated sewage.

Seagrass meadow community dying due to sewage and sediment.

By the 1970s it was clear that the Mediterranean was dying and in 1985 a multinational conference outlawed oil dumping and established over 200 pollution monitoring stations - more needs to be done.

Egyptian dams evaporate one third of water and remove fertile silt from water, chemical fertilisers used as a substitute and in conjunction with pesticides may cause extinction of birds such as the Bald Ibis.

Tourism on the southern coast of France.

(Reference to the port city of Leptis)

Episode 4. "Strangers in the Garden" 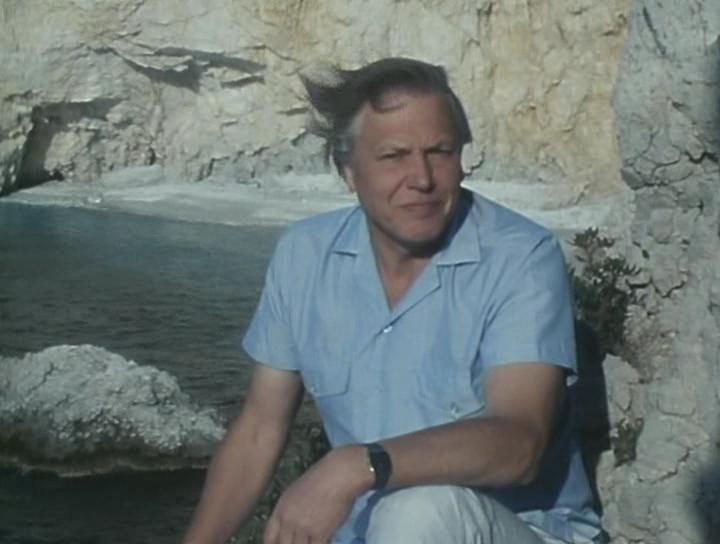 right|thumb|David Attenborough on Mediterranean shore, circa 1986">

Episode.4."Strangers in the Garden"52 min 25 secFinal piece to camera for series.