While he may be best known for his early work on freeware titles such as Eternal Daughter, Yu continues to make games. An early exposure to the Nintendo Entertainment System explains why older titles provide him with inspiration.[3]

Yu has helped make freeware games in the past and commercial efforts today.

Early in his game-creating career he was associated[4] with a freeware game website solely distributing its own wares,[citation needed] including Diabolika and Eternal Daughter.[5]

Eternal Daughter (2002) is a platform game that was developed over a two year period.[3][5] 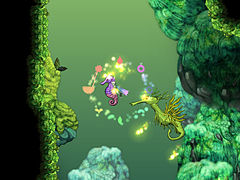 Yu has worked on several games sold outside of traditional distribution channels. He helped create the award-winning 2007 Aquaria[7] and was part of the two-man team[8] that released it, Bit Blot.[1]

A collaboration between Yu and Alec Holowka (at times a long-distance one,[2] as the two live in separate countries),[1] Aquaria is a side-scrolling video game that takes place underwater.[1] It won the Independent Games Festival's 2007 Seumas McNally Grand Prize,[9][10] was available as a download,[9][11] and was also sold in a Humble Indie Bundle.

Spelunky is a platform game reminiscent of the 1983 Spelunker. It will be available through Xbox Live Marketplace in the future.[12]