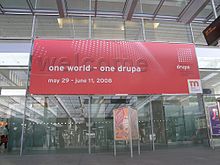 Drupa is the largest printing equipment exhibition in the world,[1] held every four years at Messe Düsseldorf GmbH, City of Düsseldorf, Germany.

The official 1986 Drupa theme song was nominated as one of the worst corporate anthems ever by The Register. The song featured a country folk style.