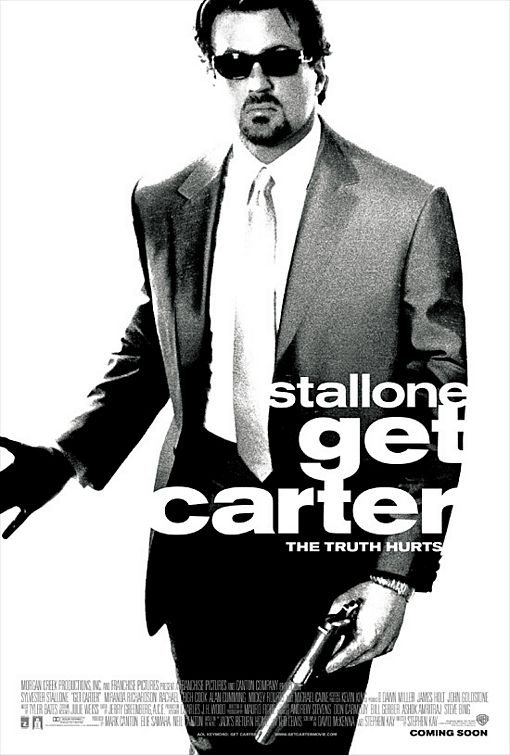 Jack Carter (Stallone) is a cool and calculating mob enforcer who's known for his physical means of getting the job done.

When told that his brother was killed in a drunk driving accident, Jack returns home to Seattle where he tries to make amends with Richie's wife, Gloria (Richardson), and his niece Doreen (Cook). Jack also investigates Richie's death after he realizes Richie was murdered. While he starts snooping around, his mob partner in Las Vegas, Con McCarty (McGinley), covers for him with the mob boss, Fletcher. A secondary plot revolves around an affair Carter was having with Fletcher's girlfriend, Audrey (Mol).

His first stop in his investigation is with loan shark Cliff Brumby (Caine), the owner of the club that Richie managed. Brumby doesn't believe Jack's allegations of murder, but does tell him that Richie was having an affair with Geraldine (Mitra), an associate of local boss Cyrus Paice (Rourke).

Con and a fellow gangster from Las Vegas track Jack down and confront him after Jack says he's done with Vegas. After knocking both of the men out, Jack has a talk with Doreen about what happened.

Intending to settle the score, Jack begins a path of vengeance. He gets a frantic, apologetic call from Geraldine who tells him Paice was coming to kill her. After he finds Geraldine's body, Carter heads straight to Eddie's apartment, and throws Eddie off of a balcony to his death. Carter gets involved in a car chase with Con and the other gangster, only to lose them when he causes them to lose control of their vehicle. Visiting Kinnear's house, he confronts Cyrus, who tells Jack that he should be going after Kinnear, because Kinnear is the man behind Ritchie's murder. Jack has a vicious fight with Cyrus, losing at first only to return and kill Cyrus. He then confronts Kinnear, who says that all he told Cyrus to do was get the disc back from Richie, not kill Richie, and that it was Cyrus and Brumby who killed Richie. Carter decides to not kill Kinnear. After getting a call from Audrey, who breaks up with him, Carter confronts Brumby as Brumby is breaking into his car to retrieve the disc. Brumby admits that he was involved in the murder and, as he is walking away, Carter shoots him in the back.

After settling the score for his dead brother, Carter starts thinking that maybe collecting debts for a mob boss is not the life for him, having formed a bond with Doreen. He leaves for whereabouts unknown.

Critical reaction was largely negetive. The film received a 12% favorable rating among the critics tracked by . [ [http://www.rottentomatoes.com/m/1100569-get_carter/ Get Carter] , Rotten Tomatoes] It did not do well at the box office, with worldwide takings of approximately US$19 million coming under the production budget of $40 million.

Among the positive reviews, praised "the sharp turn given by Sly Stallone, its groovy tunes, and its generally dark and gritty nature." [ [http://www.joblo.com/reviews.php?mode=joblo_movies&id=17 JoBlo.com review] ] Rob Blackwelder of SPLICEDWire called the film "a stimulating visual showcase of stylish film making that keeps a viewer's attention." [ [http://splicedwire.com/00reviews/getcarter.html SPLICEDWire review] ] Chuck O'Leary of FulvueDrive-in.com said that "the original "Get Carter" is better, but this is quite watchable as far as modern-era remakes go." [Review by Chuck O'Leary, FulvueDrive-in.com]

Shawn Levy of the gave an average review, saying that "the film doesn't touch the original, it doesn't hit rock bottom, either." [Review by Shawn Levy, Portland Oregonian] Kevin Thomas of the said the film is "not a terrible movie" but "too routine for its own good." [Review by Kevin Thomas, Los Angeles Times] Marc Savlov of the said that "the film itself is a muddle, [but] what is good is Stallone.". [Review by Marc Savlov, Austin Chronicle] Bob Graham of the said the film "is murkier than it needs to be, through no fault of Stallone's." [ [http://www.sfgate.com/cgi-bin/article.cgi?file=/chronicle/archive/2000/10/07/DD1017CH.DTL&type=movies Review by Bob Graham] , San Francisco Chronicle]

Among the negative reviews, Todd McCarthy of Variety called the film "a useless remake." [ [http://www.variety.com/body.asp?HbkId=61345&CatId=REV&ReviewID=1117788272&SubCatid=31 Review by Todd McCarthy] , Variety] A.O. Scott of the said that the film is "so minimally plotted that not only does it lack subtext or context, but it also may be the world's first movie without even a text." [ [http://www.nytimes.com/2000/10/07/arts/07CART.html Review by A.O. Scott] , The New York Times] Elizabeth Weitzman of the called the film "a throwaway story hidden beneath a messy jumble of weird camera angles, worthless editing tricks and an ill-placed, obnoxious score." [Review by Elizabeth Weitzman, New York Daily News]