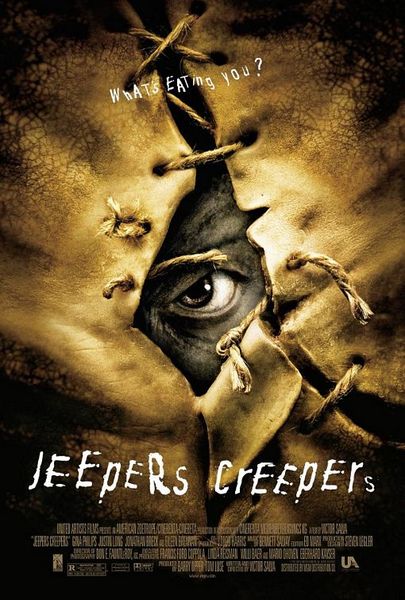 "Jeepers Creepers" is a 2001 written and directed by .

The movie takes its name from the song Jeepers Creepers which is featured in the movie.

The revolves around a and , Darry and Trish, returning home from college during a spring holiday break. Their journey is uneventful, and they spend the time talking about their parents and college life, until suddenly they are terrorized by someone in an old armored , and later see the unloading what looks like bodies into a hole as they drive past.

After escaping, Darry insists they go back and investigate. Darry orders Trish to hold his feet while he looks in the hole (a long metal tube angled deep into the ground). Rats appear in front of him and he freaks out and falls into the hole. Once at the bottom, he finds hundreds of bodies sewn together, covering the walls of a massive cavern. After Darry gets back out, he and Trish flee the scene, then stop at a gas station where they contact the police. While waiting for the cops to arrive, they are phoned by a local psychic, Gezelle Gay Hartman, who warns them what they are up against. She plays them the song "Jeepers Creepers" through the phone, and tells them that when they hear that song, they will be in extreme danger. Badly frightened, they take no notice of her. The police follow them as escort to protect them from the potentially vengeful killer.

As they travel, the police are attacked by the truck driver, and one of them is decapitated. Darry and Trish watch as the man picks up the head and eats the tongue out of it. As they escape, he loads the bodies into his truck (while whistling the tune of "Jeepers Creepers" played by Cody Sharp) and resumes the chase. Darry and Trish try to get help from a local eccentric, but the killer catches up to them and kills her. They manage to hit the killer with their car, and run him over several times. After crushing the body they realize its inhuman nature when its wings, heretofore unseen, begin flapping around. They drive to a police station to wait for their parents, but Gezelle shows up and warns them they are still not safe. Gezelle tells them the true nature of the mysterious creature: it is an ancient demon known as "The Creeper", which rises every twenty-third spring for twenty-three days to feast on human body parts which form part of its own body upon consumption. She also tells them that it seeks out human body parts by scaring humans and smelling them through fear, and that by smelling the fear from Trish and Darry, it has found something it likes, but she does not know what.

The Creeper attacks the police station and gains entrance to the jail cells. After it feasts on prisoners it is swarmed by police, but it easily kills a number of them. Gezelle guides Trish and Darry upstairs, telling them one of them will die, screaming in the dark while the song Jeepers Creepers plays in the background. The Creeper heads towards Gezelle and sniffs her for a fear it likes, but lets her go when he realizes that she is not scared of him, and heads off to find the siblings.

The Creeper catches up and captures Darry. Trish tries to reason with it, and tries to give her life for her brother's as the police burst in and take aim, but the Creeper refuses and escapes out the window with Darry. The next day, Trish, contemplating Darry's fate, is picked up by her parents, and Gezelle returns home in regret.

The final scene shows the Creeper in its new hideout, an abandoned boiler factory, where the audience finally learns what the Creeper wanted: by ripping out the back of Darry's head, it has consumed his eyes, leaving him as nothing but an eyeless, motionless corpse (this was forshadowed in an earlier scene when there is a closeup of the Creeper's eyes while Trish tries to reason with it).

After the end scene when the Creeper gets what he wants, there was an extended ending (cut out). In this ending everything was just a story told by a person named Gary (also played by Justin Long) to his girlfriend, Lisa (also played by Gina Philips). She does not believe him and they leave their camping site so they do not miss the bus. But instead of getting on the bus, they hitchhike and get picked up by a green truck. Unfortunately, it turns out to be the Creeper's truck and as the scene fades out, Lisa turns on the radio where "Jeepers Creepers" is playing.

In 2003 a sequel was released, "". Events in the second film take place days after the first film. The Creeper and Darry are the only characters to appear in both films, although they are not the only actors to appear in both films. In the first film, actor Tom Tarantini appears as the minor character "Austin McCoy" AKA "Roach" who is a car thief and regular in the Poho County jail. In the second he portrays "Coach Dwayne Barnes".

has announced a third installment, "Jeepers Creepers 3: Cathedral". The film will continue the story of the original film with Trish () as she fears her son will have the same fate as her long lost brother Darry (), the boy's namesake. The film will also feature the infamous Creeper truck. will return as the Creeper and reprise his role of Ray Wise. will return as both director and writer. It has recently been confirmed that MGM Studios is interested in bringing a fourth movie to the series and that they intend Salva to film it back-to-back with Jeepers Creepers 3. [ [http://www.shocktillyoudrop.com/news/topnews.php?id=3488 Confirmed: Salva Writing & Directing Jeepers Creepers 3 - ShockTillYouDrop.com ] ]